Movie Review - Sorry to Bother You 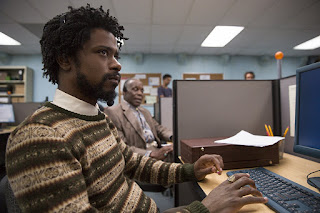 Boots Riley's film is a bit of a mess. He has several ideas at work here. He has two major ideas from which he swings one to the other and not very artfully. There is the thinnest of threads connecting them but it's not enough to hold the ideas together. There is a disconnect with them and the characters, so that we don't feel enough about anything on screen. There are a lot of scraps here that feel cobbled. He jumps from one scrap to the next without bridging the gaps, so much so I'm not sure what the movie is trying to say in particular. It's simply throwing a lot of things at the wall to see what sticks. The whole film probably congeals in Riley's mind, but it's too all-over-the-map and jarring for me.

Lakeith Stanfield (Atlanta and Short Term 12) stars as Cassius Green aka Cash, not a subtle or nuanced name. He's a young, black man in Oakland, California. He gets a job at RegalView, a telemarketing company. Everytime he's on the phone with a potential client, he also imagines or projects himself in the homes of those potential clients. Those moments are brief, given that most people hang up on him. His fortune changes when he decides to do "white voice," which he's told is sounding rich, successful and like you don't care.

However, this film isn't about analyzing intonation or even the diction of white people as opposed to black people. It would have been interesting if this film were about linguistics. Like Arrival (2016), the linguistics here is just a Trojan horse that Riley uses to get us somewhere else. It's a shame because how black people communicate pitted against how white people communicate could be an interesting through-line the movie could have maintained and explored. Instead, the white voice is nothing but a gag, a cheap one.

David Cross (Mr. Show and Arrested Development) is a 50-something white actor whose voice is used any time Cash goes into white voice. To those who are familiar with Cross' voice, you'll recognize it immediately. To those who aren't familiar with Cross' voice, you'll still be able to recognize that the voice is overdubbed. It doesn't seem as naturally added as good ADR is supposed to sound. It's almost as bad as a Kung-Fu movie with slightly off lip-sync.

It's a pretty on-the-nose cheat though. Having a white person be the white voice is too easy. Stanfield was in the Oscar-winning Get Out (2017) in which he had to act like a white person and put on a veritable "white voice" in that film, but, in that film Stanfield used his own vocal chords. He didn't need to be dubbed. Here, it should have been the same. Stanfield could have mimicked Cross' voice without any need for dubbing. Doing the dubbed voice felt lazy in a way. It didn't come off as funny to me. It was rather frustrating.

Otherwise, the white voice doesn't even make sense because the distinctions aren't drawn necessarily along racial lines. Riley draws the distinctions along socioeconomic lines. White voice is basically short-hand for wealthy voice. Cash doesn't sound white per se. He sounds wealthy, which of course the majority of wealthy people are white, so it's practically one and the same but again, Riley's film isn't really about the persona or behaviors that poor people would have to adopt to exist or even evolve into being or pretending to be a wealthy person. Riley pivots toward essentially setting up a class warfare, an exaggerated and cartoon version that one might expect in an episode of BoJack Horseman.

What the film does is veer into Norma Rae (1979) territory. If BoJack Horsman did a homage to Norma Rae, then that feels like what Riley is trying to accomplish, but he can't quite pull it off. Aside from making more money, the movie doesn't do enough to convince us why a labor union is necessary here. Norma Rae made us feel the oppression from the company or business at its center. This movie doesn't do so. The company or business at the center here is the aforementioned RegalView but the movie never shows how RegalView is oppressing its workers to the point they would want to protest and form a labor union like Norma Rae. Yes, it's a crappy job but not as oppressive as the factory in Norma Rae. When the protests happen, it's not even clear what the workers' demands are.

Steven Yeun (Okja and The Walking Dead) plays Squeeze, a fellow telemarketer at RegalView. He befriends Cash but he doesn't hesitate to hook up with Cash's girlfriend, which is a fleeting moment that is never addressed by him. He instead focuses on organizing the protests and forming the labor union. He hints that he's not really motivated by anything except the thrill of doing it. That's fine, but it would've been better if the other employees at RegalView who rally behind him had better motivations or any at all.

Tessa Thompson (Thor: Ragnarok and Creed) co-stars as Detroit, the girlfriend of Cash. She's an artist. She's a painter and she does performance art. She's also an activist who joins Squeeze's labor union push but her major gripe is at a bigger company called WorryFree. A lot of her work is anti-consumerism and anti-exploitation by corporations. She believes WorryFree is guilty of exploitation that rises to the level of slavery.

When Cash goes to work for WorryFree, which uses RegalView for its telemarketing needs, it becomes somewhat of an issue between Cash and Detroit but not enough to have any dramatic resonance. Cash and Detroit do have a fight in bed about it, but it's not enough to sell that their relationship was in much danger. Stanfield and Thompson are good actors but I'm not sure I bought their relationship much at all any way.

The last third of the movie features a very weird, science-fiction turn. It's a turn that didn't work for me at all. The movie was already working at a ridiculous tone but the sci-fi turn ups the ridiculousness to an amount that sinks the whole thing. Suddenly, the movie becomes Teenage Mutant Ninja Turtles (1990). I didn't mind that 1990 film but mutating into it in the last third of this movie is too jarring a switch.

At one point, I was reminded of John Singleton's Higher Learning (1995). In that movie, Omar Epps tells Morris Chestnut who plays a track star how the school is exploiting him and how all he'll ever be is a runner like a horse. As we've seen with the recent Roseanne Barr scandal, comparing a black person to an animal is racism. Here, Riley makes that kind of racism literal in its depiction, but I don't think whatever message he was trying to convey is coherent enough to survive the violent and vulgar silliness to which everything descends.