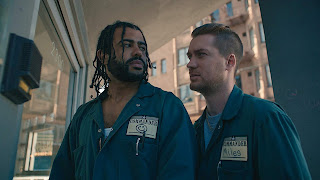 Daveed Diggs won the Tony Award for Best Featured Actor in a Musical as Thomas Jefferson for the Broadway hit Hamilton (2015). He also won the Grammy Award for that role. Before that, Diggs was part of a rap group called Clipping. He's appeared in a couple of TV shows and movies, but this film would be his debut as the lead in a feature. In addition, he's also the co-writer of the narrative, set in his hometown of Oakland, California, which is now the third time Oakland has been on the silver screen this year, following Sorry to Bother You and Black Panther, but no doubt Diggs and Carlos López Estrada in his directorial feature debut make the best use of Oakland than either of those other two, black-helmed movies and in fact this film allows Oakland to be itself and breathe more on screen than even Ryan Coogler and Boots Riley accomplished.

How one sees Oakland and particularly the two central characters is dependent on perspective and circumstance. One person can see the city in one way and another might see the same thing but in a different way or as something else entirely, which is also the essence of film criticism. Estrada sets up this dynamic from the very first seconds of this movie with a very effective split-screen. Other times, Estrada utilizes long, tracking shots, which remain wide allowing the audience to absorb the environment, form its own perspective and be drawn in specific ways. Estrada's technique reminded me of the way Steve McQueen utilized similar, long, tracking shots in Shame (2011) and 12 Years a Slave (2013).

Diggs stars as Collin Hoskins, a bouncer at a bar who is released from prison at the start of this film for a crime that isn't revealed until later, but he's put on probation for a year and sentenced to a halfway house for that amount of time with a strict curfew of 11PM. His girlfriend and best friend help him to get a job with them at a furniture moving company in Oakland. 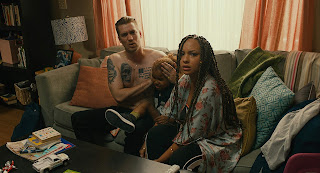 Rafael Casal who co-wrote the film also co-stars as Miles, a guy who comes across like mid-2000's Channing Tatum mixed with Eminem from 8 Mile (2002). Miles is a loud mouth, a bit of a low-level, con artist and a fast-talker. He could also be considered a "wigger," although he doesn't seem to be perceived as inauthentic as that word suggests. He's Collin's best friend and by all accounts was born and raised in Oakland, which has a large, African-American population, so it just seems as if Miles isn't acting but rather being the person who might naturally evolve from that environment, but it's not that cut-and-dry.

However, for most of this movie, it felt like Friday (1995) starring Ice Cube and Chris Tucker. That 1995 film has been dubbed a stoner, buddy comedy. Like Harold & Kumar Go to White Castle (2004) or Pineapple Express (2008) that would follow, a stoner, buddy comedy typically requires the two main characters to both smoke marijuana. Here, Miles is the only one who lights up. Also, these stoner comedies all take place in one day or all in one night. Here, there is a specific countdown of three days.

Like in Friday, Collin and Miles tour the neighborhood and encounter various, colorful characters in the area. In Friday, the two guys went from person-to-person or rather had person-after-person come to them simply because they were there and bored. Here, Collin and Miles are at work at the furniture moving company. We see them punch in, suit up and take the company truck out to various houses needing their services.

In addition to Friday, which was mostly a comedy for comedy's sake, an almost satirical take on Boyz N the Hood (1991), this movie isn't just comedy for comedy's sake. It's also trying to make a grander point, specifically a grander point about Oakland's real estate and culture. In that regard, this film could be compared to Oscar-winner Barry Jenkins' Medicine for Melancholy (2008), which is ostensibly a romance film but it's also a commentary on the gentrification in San Francisco and the rise of the hipster scene. San Francisco is just across the bay from Oakland, so bleed over of gentrifying hipsters was inevitable and Diggs' script echoes that sentiment and what is mostly a sense of frustration about it. 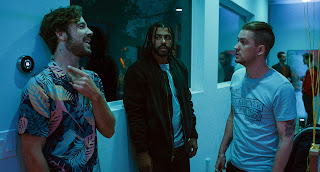 Every person that Collin and Miles meet on the job is a gentrifying hipster, mainly a white person inhabiting or occupying a space that is almost foreign or antithetical, which wouldn't be a problem, if at times the occupation didn't feel like an inquisition or simply an imposition, causing culture clashes of the micro-aggression sort that can rise to horrible offenses or even discriminations. It's this kind of racism that was so grossly hyperbolized in Jordan Peele's Get Out, but Diggs nails it more perfectly without the need of supernatural or sensationalized horror.

In fact, through Estrada's use of carefully framed and lit camera shots, as well as Diggs' raw and chilling performance, there are sequences here that are far more terrifying or scary than most everything in Get Out. Diggs also is topical, directly addressing the issue of Black Lives Matter, but in a way that films like Fruitvale Station (2013) or even TV shows like Netflix's Seven Seconds haven't. This movie conveys the fear, the true fear that black men face and experience as a result of the frayed relationship and outright tension between the police and the black community. Diggs' character is never diagnosed as such, but his character Collin could be one suffering from PTSD and Diggs' performance is so on point that I would consider him for the Best Actor Oscar. 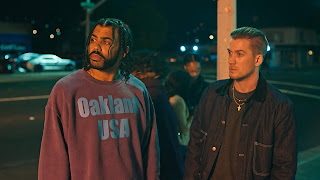 There's also a slight sense of guilt, which Estrada plays up through dream sequences. One has Collin coughing up bullets in a scene reminiscent of Christopher Scot Cherot's Hav Plenty (1997), which conveyed a kind of powerlessness or loss of control that black men feel when it comes to situations involving police or the criminal justice system, especially if they're impoverished. Another particularly haunting scene involves Collin in a cemetery with countless ghosts of slain black men all staring at him, standing as a warning and a reminder of the specter of death that black men carry or take with them.

Collin, like a lot of black men, raps and uses hip hop as a way of expression. Throughout the film, rap is used in a charming, almost humorous fashion. However, in a very crucial and critical moment, it's also belted out as a tool for catharsis and Diggs' seemingly freestyle rap is so forceful and powerful that one can't help but be swept up and exasperated by its conclusion. His final rap could for sure become an instant anthem for not only black men but all oppressed people. 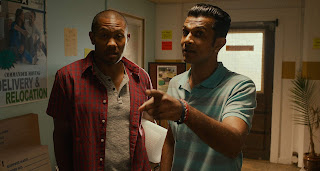 The movie though isn't so serious. The infusion of comedy and implementation of it is extremely well done. Estrada balances the comedy and catharsis here so well, as well as the best filmmakers. One such example is the Scorpion Bowl scene. It starts off like the Drunk History-inspired scene in Ant-Man (2015), but instead of Michael Peña, this movie has Utkarsh Ambudkar (The Mindy Project and Barbershop: The Next Cut) who leads the whole thing to a dramatically ironic gag. He also leads to a very indicting moment of the toxic dynamic between Collin and Miles, and it's wrenching.

And, ultimately, that's why this movie succeeds over Black Panther or Sorry to Bother You. There is a wrenching, emotional core to this film that the aforementioned movies lack. You feel in your gut and in your soul for Diggs' character. He's heartbreaking here. Bouncing off Casal, he's thus created one of the best films of the year.