This film feels like an excuse to show off Dwayne Johnson's amazing upper body strength. There are so many action scenes where Johnson can only use his arms, specifically where he has to lift himself up only using his top-half. There are several of these scenes and they go on for a long time, as if to doubly emphasize Johnson's biceps, triceps, lats and deltoids. Writer-director Rawson Marshall Thurber's last film was the comedy Central Intelligence (2016), which also starred Johnson, so when he was crafting this movie, Thurber probably had Johnson in mind, but, this film could have also been the perfect vehicle for the specific type of wounded warrior whom Johnson portrays.

Johnson in fact portrays Will Sawyer, a former soldier who is injured so badly that he loses a limb. Will actually has a trans-tibial amputation on his left leg. Photographer Michael Stokes has brought to light amputees such as this. A lot of whom are from the military. One of which is Chris Van Etten, a U.S. Marine who was injured in Afghanistan and became a double-amputee. Van Etten also became an actor last year appearing on ABC's General Hospital. Van Etten wouldn't have been right for this role, but Johnson can certainly represent for men like Van Etten. However, having someone like Van Etten, even in a minor role, would have been nice. Actually, the role that Pablo Schrieber had as Will's best friend could have been filled by a real-life wounded warrior. 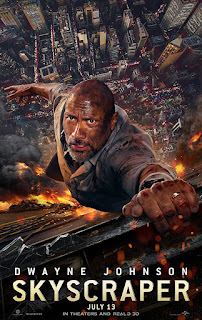 Thurber comes up with some crazy sequences though where Will's excellence isn't in his legs and those sequences in a way can be inspirational for lower limb amputees. The initial fight, the first hand-to-hand combat was well-staged. There was no music for that initial combat. It felt raw and it underlined Will's disability. As the movie goes on, that underlining goes away to a degree almost to make you forget that Will is disabled. His being disabled comes at a surprise in moments sometimes for comedic or thrilling effect, but I felt like Thurber could have done more with it. For example, Will has a prosthetic leg that comes in handy, but I almost wish that Will had done the whole movie without the prosthetic. Having Johnson hop around on one leg for the whole movie might have been a costlier visual effect and more comedic as depicted than Thurber might have wanted, but this movie gets to a point as to question why the decision was made to make him an amputee at all.

As it's been said by other critics, this film is basically The Towering Inferno (1974). This movie's centerpiece is the 220-storey building that is the setting, which is hacked by terrorists and taken siege until it's set on fire. The thrust of it is the people trying to escape the structure alive. Unfortunately, Thurber doesn't make that building as interesting as it's supposed to be or as much as one would hope. One would think the hacking of a fully-automated, extremely tall tower would make for more ideas than what we get here. The high-rise in Gremlins 2: The New Batch (1990) was a more interesting building than the one here. Thurber doesn't really take the time to explore the building and give us a sense of its geography internally. 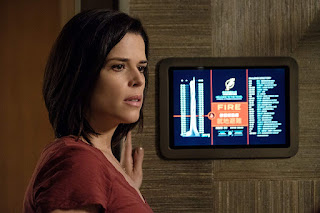 The movie only establishes two places in the building and once we return to those two places, only one of them is utilized to any great effect. Most of the memorable moments occur outside the building, including a scene involving Neve Campbell (Scream and Party of Five) who plays Sarah, the wife of Will. She's not just the worried wife and mother. She gets to be a bit of an action star too and strangely she's more enjoyable than almost everything involving Johnson. We get a little bit of her trying to escape the building but it's not enough to sell us on the danger inside.

Rated PG-13 for sequences of gun violence and action, and for brief strong language.
Running Time: 1 hr. and 42 mins.