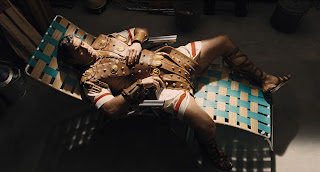 Joel and Ethan Coen's film feels like a rebuke to Jay Roach's Trumbo. It's set in 1950's Hollywood. It involves a group of writers who identify as Communists who try to subvert or exploit the movie-making industry. In Trumbo, those writers are fighting oppression and discrimination, and just struggle to find work. Those writers are heroes. Here, those writers become more the subject of derision and slight villainy. It's not enough of a rebuke because those writers or interactions with them don't constitute a storyline that rises to an equal level. It's arguably not even a central storyline despite involving George Clooney. It's essentially just a trifle, no weight to it at all, and you don't care about it. You don't care about Clooney's character and the whole Communist conspiracy thing is revealed to have no stakes.

Clooney stars as Baird Whitlock, one of the biggest Hollywood actors who is the lead of a huge production called "Hail, Caesar" that has him playing a Roman general holding slaves in the time of Jesus Christ. One day, Baird is drugged and kidnapped from set. Later, the head of the movie studio making the production gets a ransom note from the kidnappers.

Josh Brolin co-stars as Eddie Mannix, the aforementioned head of the movie studio who not only has to oversee Baird's safe return but he also has to manage several other productions that are having problems, as well as controlling bad press in the media.

All of this is great foundation for an interesting send-up of what has been criticized as the controlling and authoritarian studio system of that era. Unfortunately, this foundation collapses because quickly it is felt that none of it matters. As weird and funny characters pop in and out, it becomes clear that they're there just to pop in and out, ultimately being of little to no consequence.

The Coen brothers try to build up the importance of this "Hail, Caesar" production, but it never goes far enough. It really never goes anywhere, except into several irrelevant or non-sequitur places. A subplot involving Scarlett Johansson and Jonah Hill was extremely pointless. The subplot involving Channing Tatum was less pointless but still ultimately of so little consequence.

Tatum plays Burt Gurney, an actor performing as a tap-dancing, singing sailor in a musical where the signature song is "No Dames" where a group of boys in the Navy lament and/or praise the fact that serving at sea means they won't encounter any women. It is perhaps the second, most homoerotic role Tatum has had, behind Magic Mike and just ahead of his cameo in This is the End where he proclaims an actual homosexual act. Tatum is well-used for his dancing abilities but not well-used elsewhere as Tatum still isn't a good actor.

Other Coen regulars like Frances McDormand pop in for one scene. The Coens also wrangle quite a few of the supporting cast from The Grand Budapest Hotel, but perhaps the real standout is Alden Ehrenreich who plays the young, handsome cowboy on-screen and off-screen, Hobie Doyle. Ehrenreich is a 26-year-old actor who essentially had his first feature be Francis Ford Coppola's Tetro (2009).

It's unclear though if the Coens are mocking Ehrenreich's character or not. The Coens also don't allow us into Hobie's head or give enough to build a narrative arc for him. The trick is that Hobie is good at physical things like horse acrobatics, but Hobie is not good at other things like delivering dramatics. Hobie is the Channing Tatum of the movie-within-this-movie.

Sadly, the Coens use Ehrenreich for really only one joke, which gets repetitive, and let him have fun with lassos of rope and pasta, but otherwise they waste the full range of a boyish actor who not only has the look but the talent of a young Leonardo DiCaprio.

With a bookend of a Catholic confession, the Coens try to make us feel something for Brolin's character, but the Coens move him from plot point to plot point without really rooting him in anything firm. I wasn't sure if his Eddie Mannix cared about his job or his family. I wasn't sure if Eddie cared much about anything. Yes, he seems concerned with getting forgiveness from the priest but that felt like a role he was playing as anything else.

Two Stars out of Five.
Rated PG-13 for some suggestive content and smoking.
Running Time: 1 hr. and 46 mins.