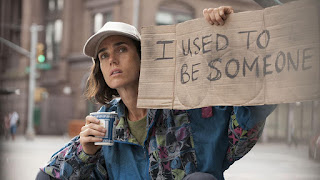 This film could be a companion piece to last year's Time Out of Mind, the movie that had Richard Gere as a homeless man in New York City. Oscar-winner Jennifer Connelly (A Beautiful Mind) stars as a homeless woman in the same place. Like with Oren Moverman's film, this piece, written and directed by Paul Bettany, also pairs his star with a black man more down on his luck. Moverman offered Ben Vereen. Bettany instead offers Anthony Mackie with whom he shared a scene in Avengers: Age of Ultron, but this certainly is not a movie about super heroes.

Mackie is Tahir, a Nigerian immigrant who sleeps on the streets, in the corners of alleyways, on top or even under bridges. He plays drums on white plastic tubs, like other street musicians, for money that he uses to buy food or whatever he can to sustain himself.

Connelly is Hannah, a drug addict who sleeps on top or even under bridges too. She also engages in prostitution in order to sustain herself. As the film progresses, more is learned about her. She has an easy way out of homelessness, but she chooses not to take it.

She falls in love with Tahir reluctantly. In many ways, he helps her to clean herself up and get back on track, but it could be argued that her love also causes some serious destruction. If anything, it causes her to make stupid decisions, which undermine her situation. However, it doesn't take away from the external difficulties of dealing with the shelter system.

Bettany doesn't make the case as well as Moverman. As he's said in interviews, specifically one on the DVD's extras, Bettany wasn't trying to make that case. He repeats that his goal was to do a film on judgment and judgments that people who aren't homeless have on people who are homeless or even judgments amongst the homeless themselves.

He does accomplish this goal. He perhaps goes too far. It's interesting to see the two characters sit down and have such an intelligent conversation about belief, as well as creationism vs. the Big Bang Theory. He then proceeds to saddle them with such horrible life-stories. That weight is perhaps too much.

Three Stars out of Five.
Not Rated but contains sexual situations and brief, bloody violence.
Running Time: 1 hr. and 45 mins.