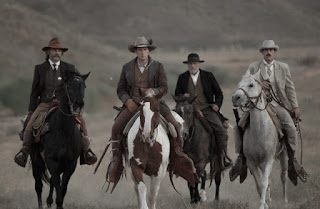 One hundred movie theaters were converted in order to accommodate the 70mm screenings of The Hateful Eight. It got a wide release in thousands of multiplexes nationwide. It got an incredible amount of press and even three Oscar nominations. All of the acting accolades is going to Jennifer Jason Leigh, but Kurt Russell gives a great performance as well. However, it's trapped in a flawed film, an offensive and more disgusting film, Quentin Tarantino's version of a western. Earlier in the year though, Russell appeared in another western, one also a bit disgusting in terms of its gore, which pushes it into horror film territory. It can be seen as offensive, but it's way more economical, not as indulgent, more action-oriented, more propulsive, and way more personally dramatic, as it juggles half the amount of characters.

Kurt Russell stars as Franklin Hunt, the Sheriff of Bright Hope, a town existing on the frontier between the American Civil War and the turn of the 20th century. He's a no-nonsense kind of guy, a real straight-shooter, noble and empathetic but very smart, discerning and takes no crap.

Patrick Wilson co-stars as Arthur O'Dwyer, the resident doctor of Bright Hope. He lives in a two-story home with his wife and fellow doctor, Samantha, played by Lili Simmons. At the start, he's bed-ridden after breaking his right leg from falling off his roof. His leg has been set with wood and he needs a crutch in order to walk. His wife takes care of him and takes care of medical emergencies in town, but Arthur is somewhat prideful to do things on his own and take the lead when he can.

Richard Jenkins also co-stars as Chicory, an older man who is seen working at the town's bar. He plays piano for money. He could be the town's entertainment, but he's also an emergency deputy for the Sheriff to provide back-up, if ever there were more trouble that the Sheriff couldn't handle or needed extra help. He more than likely served in the war and also had medical training. He's kind of a moral center for the film and for the town.

Matthew Fox plays John Brooder, a well-dressed and well-mannered gunslinger. He's a bit of a refraction or distorted image of Sheriff Hunt. He's a bit of a no-nonsense guy too, noble but not as empathetic or sympathetic toward people. He's the only man who isn't a family man. It allows him to be tough and even cold without much pity. He does questionable things, but he's no question a good guy deep down.

The four men embark on a rescue mission when a group of Troglodytes attack Bright Hope and kidnap three people. The offensiveness comes from the Troglodytes, obviously inspired by Native Americans' iconography and stereotypes. They're referred to as savages, which they are when their true nature is revealed at the end. The savagery is justified like in The Revenant as an act of revenge for crimes committed against them but taken to unjustified extremes.

Written and directed by S. Craig Zahler, the movie goes for the off-used demonization of native peoples. Zahler goes so far into ridiculousness that embracing it as a horror is the only acceptable way, but there's no commentary on encroachment, environmentalism or entropy. As such, it all could just be a throwaway, but, in a better manner than The Revenant, it's also about the singular triumph of will, and man overcoming physical limitations as well as the dangers of the wild or nature in general.

At a basic level, Zahler has simply crafted a great adventure. Four men go out on a journey and face a series of escalating obstacles. Zahler builds tension and drama every step of the way, properly amplifying the stakes and the challenges until hope is lost and characters are broken down. Jenkins has gotten the most kudos for his role, but Russell and especially Wilson shine brightly too.

The movie got a limited, theatrical release but became more of a VOD release. It was also released at the tail end of 2015 on DVD. I overlooked it, which I regret. If I hadn't, it would have made my list as one of the best of the year. I actually enjoyed it more than both The Hateful Eight and The Revenant.