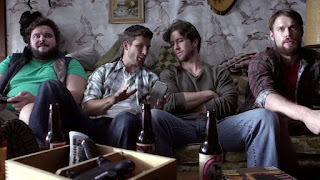 If one didn't know the premise of this film, it doesn't take long to figure out what it is. Evan Todd stars as Adam, a 24-year-old mechanic in Albany, New York, who is nervous about wanting to tell his friends something, a secret supposedly. It's maybe not apparent, given Adam's appearance. He looks like your run-of-the-mill, scruffy, white, heterosexual, single dude who goes out drinking with his scruffy buddies as they talk sports and hit on girls. Yet, almost right away, it's clear that Adam isn't interested in hitting on girls. After being anxious and agonizing over it, Adam finally whispers to his best friend that he's gay.

Parker Young (Suburgatory and Enlisted) co-stars as Chris, the aforementioned best friend who is obviously the hottest of all the four guys we meet. He's also the clear ladies man. He's the most charming, and the one who sleeps with the most women.

Chord Overstreet (Glee) also co-stars as Nick, a guy who doesn't seem that different from Overstreet's character in Glee. Except, Nick is more homophobic. He becomes convinced that Adam wants to have sex with him, either because all gay men are lecherous and/or because Nick himself is just so irresistible. Nick has a natural curiosity. He doesn't seem that bright, but he does read a lot, if only to randomly spit out trivia.

Jon Gabrus (CollegeHumor Originals) plays the fourth friend, Ortu, the funny, overweight guy. He's uneasy because he likes to make a lot of gay jokes or throw out one-liners that have homoerotic undertones or gay double entendres. These jokes are either mocking or lobbied as insults. At a poker game, a one-liner makes the dynamic or the energy in the room awkward.

It's not due to Adam being offended but due to Ortu and the other two guys not wanting to offend or hurt Adam. There is an empathetic sense from Ortu, Nick and Chris. They aren't bad guys, despite some of the disgusting things they do. There are a lot of stereotypical misconceptions they harbor about gay people, so much that it throws them into a bit of a panic and high discomfort, which they only express when Adam is not in the room.

None of them are mean though. Maybe they do a few stupid things, but in general they quickly accept and eventually grow comfortable with Adam. Their homophobia really is only an issue for less than a third of the film. The turn occurs where it becomes obvious that Adam is a shy guy and doesn't date any men, even after leaving high school, so Chris, Nick and Ortu take it upon themselves to help him become more comfortable and open about his homosexuality.

Aaron Dancik's debut screenplay is interesting in that it has that turn. The homophobic guys end up learning just as much, if not more about gay culture than the actual gay man and help him to come out in ways other than just saying the words. They also try to find Adam a romantic interest. The problem is that Dancik's script as it's depicted is too thin.

Dancik doesn't fill out enough of the world in which the straight guys inhabit. For example, Ortu throws a 4th of July party in his backyard, which occurs in the movie's last act. We see Ortu's girlfriend in this scene and Ortu does something with his girlfriend that felt hollow. Because we get literally nothing about the girlfriend, it's impossible for us to care about her or Ortu's relationship with her.

Besides Nick's homophobia and propensity to read and spit out trivia, we get hardly anything about him either, except a love of Les Miserables. Based on various montages, Nick is only identified as average, white, heterosexual male, which is only slightly less than Chris. Sadly, by the end, there's not many details about Chris that can be recounted either. It's also odd how Chris of them all never realized beforehand that his best friend was gay.

An action that Chris takes in the last third makes no sense. He does something, which is obviously meant to help Adam, but two seconds later, he has an attitude with Adam as if his prior action never happened. His romantic subplot is a bit clunky in its depiction. Apparently, there's one girl with whom he's supposed to be falling in love, but the movie never sells that point. At the end, it's something taken for granted.

Adam's romantic subplot isn't clunky but it's not clear what Dancik and first-time director Andrew Nackman were trying to say. There is a montage of Adam dating a series of men, all different and all clearly not suitable for him. The last guy whom he meets named Matt is hinted to be "the one" for Adam, but there's no real rhyme or reason as to why. The movie cuts before he even asks Matt out or expresses his true feelings for him.

Three Stars out of Five.
Not Rated but contains sexual situations and language.
Running Time: 1 hr. and 26 mins.

Playing in select cities and VOD.
For more info, go to 4thmanout.com.