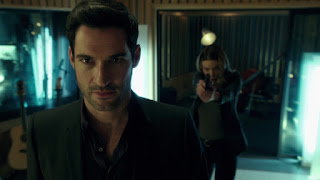 It's an adaptation or is loosely inspired by the DC Comics series of the same name. The comics were written by Mike Carey who took a character created by Neil Gaiman, Sam Keith and Mike Dringenberg. The first episode of this TV show was penned by Tom Kapinos (Californication). The second episode was written by Joe Henderson (White Collar) who is the show-runner. It's executive produced by Jerry Bruckheimer (CSI), and it's apparent that elements or sensibilities from Californication, White Collar and CSI are all present in this show.

Tom Ellis is a British actor who's first lead in an American series Rush only lasted a season before getting cancelled. Here, he plays a slightly, more smarmy version of that character. Ellis stars as Lucifer Morningstar, the literal embodiment of the Devil, the fallen angel who rules Hell or the underworld. However, he left Hell to come to Los Angeles and manage a nightclub over which he lives. He has super powers. He's immortal. He can't be hurt or killed. Bullets or knives don't really affect him. He also can make people reveal their inner desires, which he mainly uses to get people to do things for him like have sex with him. He's basically a hedonist with no sympathy or empathy for others. He's overly charming but also brutally honest.

Lauren German (Chicago Fire and Hawaii Five-0) co-stars as Chloe Dancer or Chloe Decker, a police detective with the LAPD. She's a mother to a prepubescent daughter named Trixie, played by Scarlett Estevez. Chloe is separated from her daughter's father. Yet, he's also a detective with the LAPD. He's Dan, played by Kevin Alejandro (True Blood and Southland). Chloe is herself daughter to a B-movie actress. She herself did a B-movie, which causes her embarrassment, but for the most she's a tough-as-nails cop.

Chloe investigates a drive-by shooting in the first episode. Lucifer bears witness to the shooting. As a result, he meets Chloe and is intrigued by her. He becomes obsessed when he realizes that his power of bringing out desires doesn't work on her. She's completely immune to his charm or his spell. He wants to figure out why and that question is his motivation for these first few episodes.

He basically imposes and insinuates himself in her life, assisting in her subsequent murder investigations. The series predictably becomes a police procedural with a murder-of-the-week for Chloe and Lucifer to solve. Given there are tons of cop shows where a woman plays second-fiddle to a witty, arrogant and simple jerk, this show is hackneyed and becomes boring extremely quick.

DB Woodside (Single Ladies and 24) plays Amendiel, an angel from Heaven who has no fear of showing and using his actual wings. He also has the ability to freeze or slow-down time, which he does to have existential conversations with Lucifer. He wants Lucifer to leave Earth and return to Hell, but Lucifer adamantly refuses. It's not as if Lucifer had a choice when he was kicked out Heaven, so it's not clear why he has one now.

Along the way, Lucifer is supposed to be this devilish jerk who slowly becomes more empathetic and possibly caring for humanity, a hero in fact, or simply a crime-fighter, but with a character like this, the stakes feel too low.

As I watched this show, I was reminded of three other series that invoked characters from the Bible in comic book-like or procedural adventures, or in general engaged angels and demons in epic battles. The first was Charmed (1998). The second was Angel (1999) and the last was Supernatural (2005). Arguably, all three began with what could be considered low stakes, but all shows didn't bog themselves down with meager or average, human crimes, which posed no problem for characters with magical powers or who were literally angels from Heaven.

What makes this show boring is that Lucifer isn't challenged with a threat that would create tension or any real drama. At least, Lex Luthor had Kryptonite to fight Superman. In theory, Chloe's resistance to Lucifer's charm is supposed to be a kind of Kryptonite, but it's not enough. It's predictably building to a romance between Chloe and Lucifer, which is also hackneyed.

It's not that I need Lucifer to fight other angels or demons in hand-to-hand combat, but right now it's boring because he's basically being tossed softballs. Instead of dealing with street-level criminals in Los Angeles, he should be battling terrorists. Why not have him go to the Middle East and handle the Israeli-Palestinian conflict? Having this character interact with Muslim fundamentalists would be vastly more intriguing! Anything less is a waste of his powers.

Chloe doesn't believe Lucifer when he honestly tells her what and who is, but it's played as a joke. A question of her faith or her religion is never addressed. Maybe, Chloe is an atheist and is incapable of believing Lucifer has powers. At least, Gillian Anderson's character in The X-Files when presented with supernatural things had her faith and religion addressed. Here, who knows about Chloe's faith?