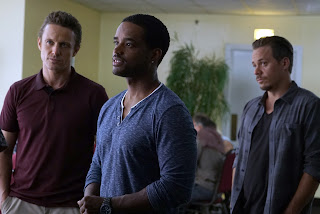 It takes waiting until Episode 3 before this series does anything that hooks me or makes me want to continue watching. Most shows that are great do so by the end of the first hour. Some shows, if they're not plot-heavy, take their time, letting acting performance sell the concept. If that is the case, then the acting better be phenomenal. Unfortunately, the acting here isn't. It's not horrible. It's very good, but it's not enough, if the show isn't going to be so propulsive or dynamic in its narrative. In general, I'm curious, but the show's chief problem is that it doesn't have the courage of its convictions.

It begins 1988 in Houston, Texas, with five, childhood friends, four boys and one girl. They steal a car, the car of the girl's mom, and get into an accident, which nearly kills a woman. The girl is told to run away before the cops arrive, while the four boys are arrested and sentenced to a detention facility where the guards and the fellow inmates do bad things to them. The boys decide to keep quiet about those bad things for 25 years. All seems fine until one of the boys runs into one of the guards and beats that guard nearly to death. This brings up all the horrible experiences for the other three boys, spurring them to seek revenge against the people who abused them.

Writer David Hudgins is adapting the Turkish series Suskunlar (2012), which might be restrained, but this show shares more of its DNA with the feature film Sleepers (1996) by Barry Levinson. That movie made clear immediately what the horrible experiences or what the bad things were. This series tiptoes around those bad things. This series never is clear even in the fourth episode when the girl-now-a-woman asks the three boys-now-men about what happened. The three men explain it to her, but the audience never hears it. The show cuts away after she asks and then cuts back after they've explained, so we don't hear what actually happened.

David Lyons (ER and Revolution) stars as Jackson Brooks, a high-powered lawyer in Houston who is engaged to be married. Michael Raymond-James (True Blood and Once Upon a Time) co-stars as Gil Harris, a contractor who does various, construction work. He's dating the girl who was originally involved in the 1988 accident. Larenz Tate (Rescue Me and House of Lies) co-stars as Shawn, also a contractor in business with Gil who is more of a bachelor and likes boxing.

Bre Blair plays Jessie West, the girl who was originally involved in the 1988 accident. She's at first in the dark but then she learns what happened to the boys in the detention facility. She decides to help the three boys enact revenge. Conor O'Farrell plays Ray Carroll, the warden of Quitman Youth Detention, the place where the boys were sent. He's the resident villain. He's the one who was the leader of the bad things that happened to the boys. He's the one on whom the boys want to get revenge.

Taking down Ray Carroll won't be easy being that he's now a powerful politician. Watching the boys try will be where most of the thrills of the show will derive. It won't be as fun as Shades of Blue, which this show replaced in the same time-slot because the villain or the antagonist in that show wasn't as cut-and-dry a bad guy. If the writers are clever, then Ray Carroll could become a formidable villain, but he seems a slightly more successful version of Kevin Bacon's character in Sleepers. If the writers want, they could make him a bit more nuanced, but he might just end up being a power-hungry pedophile.

Demetrius Grosse (Justified and Banshee) plays Terry, another villain who was a fellow inmate at Quitman that became a drug dealer and gangster with as much influence as Ray Carroll in certain circles. Through his relationship with his brother Dennis, played by Chuma Gault, there is a lot of potential here for Terry. His type of villainy though is nothing new. From The Wire on HBO to Saints & Sinners on Bounce TV, Terry is an archetype or stereotype we've seen before, but the writers again could develop the character in interesting ways.