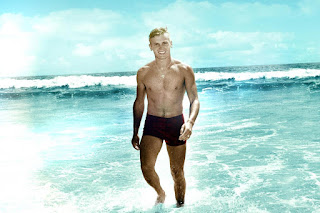 I never knew Tab Hunter, but I bought his autobiography when it came out in 2006. It's probably because the cover photo was of Tab Hunter in his prime. As such, he was a tall, muscular, gorgeous blonde with an ebullient smile, a California-surfer look but also capable of having a clean-cut, military way about him, sexy as Hell, and oozing stardom and matinée-idol appeal. He was so striking and very attractive when he was younger. He rose to prominence back in the 1950's but never achieved the kind of fame of many contemporaries, probably because he wasn't perceived as equally talented, plus his own decisions that brought his career down. I purchased the book as a hardcover, but I never read it. I started but only got past a few chapters, but the book sat on my cabinet collecting dust for nearly a decade. I only finished reading it last year when I heard this documentary was being released. The documentary is pretty faithful to the book in that it's pretty dull and not as juicy as one would hope a tell-all book should be.

Directed by Jeffrey Schwarz (I Am Divine and Vito), the movie is basically Tab Hunter at age 83 recounting his life and career. He does so with slightly more distance than he does in the book. The problem is Schwarz doesn't push him for more details, not necessarily intimate details, which would have been great but simply greater or deeper dives into his thoughts, feelings and actions. Schwarz basically lets Tab get away with very generic responses. The movie is mostly highlights, most things that could be gleaned from third-party sources. It feels like we're not hearing the story straight from the horse's mouth, when obviously we are.

Schwarz incorporates a lot of photos and film footage of the younger Tab Hunter charting his progression. If nothing else, it's wonderful to be able to bask in his beauty. Watching the movie with the audio on mute can provide just as much pleasure and information as with the audio up. Tab Hunter was simply a hot guy, but that's really all we learn about him. He became extremely popular, mostly because one could put him in a movie where he takes his shirt off and it sold tickets. Yet, clearly he wasn't going to win any Oscars. He could sing and had a voice and a manner that made girls swoon, but it wasn't going to win him any Grammys. He eventually dropped off celebrity as he got older. Now, as an octogenarian, he tends to his horse.

That's it! There's not much more to it. There was the fact that he was secretly gay but that fact feels as incidental as the fact that he likes to ride equines. The hook or essential premise is practically dismissed. It's ironic because this movie was nominated for Outstanding Documentary at the 2016 GLAAD Media Awards.

The reason the movie has the title it does is because a significant event in Tab Hunter's life is when he was basically revealed or suspected of being gay in the pages of Confidential magazine. How the magazine knew was because Tab Hunter aka Art Gelien was arrested on October 14, 1950, at a party in Los Angeles for gay people. We get an overview of the party, nothing that couldn't have been guessed, but we don't get details, no concrete stuff that occurred there.

How did Tab know about the party? How did he get invited? Who invited him? What did he do when he was there? Those details are glossed over. Prior to the party, which Tab attended while still a teenager, we get an overview of his youth living at home with his mother and brother. He gives the usual response of feeling different and quasi-realizing he was gay, but we get no details of how that manifested itself. Did he have an attraction to a specific boy? Did he ever kiss a boy or want to kiss a boy? Those questions are never answered, which is probably a failing of Schwarz not even asking them.

This is indicative of how other things in his life are handled. We get the overview for example of all his major film roles. The book provides more, which is fine. I didn't need the movie to give us everything in the book. All we needed is enough to convey that he had a macho and heartthrob image that was controlled by Warner Bros. studio. The puppet-strings aren't felt as strongly as in the book, but the basic idea is here.

The only real interesting thing is when Tab mentions his four, significant, gay relationships. The first is with Olympic ice-skater, Ronnie Robertson. The second is with Oscar-nominated actor, Anthony Perkins. The third is Neal Noorleg, a horse jockey, and the fourth is with former, 20th Century Fox, studio executive, Allan Glaser.

Tab reveals practically nothing about Robertson. What they did together or what they talked about is left up to one's imagination. How they met, who approached whom and how far they went are all left up in the air. We get more about the relationship with Perkins but the more we get barely comes from Tab. It instead comes from Venetia Stevenson, a friend and fellow actress that Schwarz interviewed for this. Noorleg is quickly introduced and dismissed. Glaser who is still involved with Tab, even today, gets the most coverage, but most of the talk is about their careers rather than their love for one another.

It's sad to think that after seeing this movie and reading the book, I still feel like I don't know this man. He's good-looking and nice, but that's all superficial.

Three Stars out of Five.
Not Rated but for mature audience.
Running Time: 1 hr. and 30 mins.
Available on iTunes on May 17.
Go to the movie's website for future VOD & DVD release.