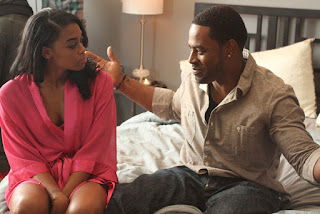 This movie got a limited, theatrical release in November 2015, but the company behind this movie is Tri Destined Studios. Of all the films in that company, the big push hasn't been in movie theaters. This one is probably the first to get as much notice in theaters as anything else, which wasn't much. Tri Destined Studios seems instead more focused on home video and television. In fact, this movie premiered on March 12th on BET where it's been running like crazy. Since its inception in 1998, Tri Destined Studios targets the so-called, urban market, aka African-American audiences. Based on a novel by Carl Weber, which he adapted, this movie is about a group of people living in an apartment building in Queens, New York. All of whom are shook up by the arrival of a new tenant and his subsequent murder.

Lamman Rucker (Why Did I Get Married?) stars as Darryl Graham, a former gang member who has perhaps done some time in prison. He says that he has three strikes against him. He even has an ankle bracelet. However, he's turned his life around, has educated himself and has gotten a good job, one assumes. When he moves into a new building, he doesn't realize he's moving into the middle of a soap opera. He's dating a girl who he used to date years ago and whom he got pregnant but she aborted. She's now a drug addict and has a boyfriend. When she dumps him, she's staying at the beach but really she lives in the same building.

Darryl starts to date the woman who lives across the hall from him, and that woman ends up being the stepmother to Darryl's drug-addicted, ex-girlfriend, Krystal, played by Nafessa Williams. It's weird because Krystal's father doesn't look that much older and also looks around the same age as Darryl. 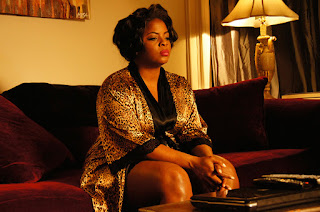 Brely Evans co-stars as Connie Mack, the aforementioned stepmother who lives across the hall from Darryl. She's a little overweight, which happened after getting married to Avery Mack, played by Anthony Montgomery (Star Trek: Enterprise and Single Ladies), a former real estate agent who now works at a furniture store. Avery is bitter about being downgraded in his job and his finances. He's also superficial and is cheating on Connie because of her extra weight. Connie still loves Avery, but she's very much like Jill Scott's character in Why Did I Get Married? and Rucker is playing the same role as he did in that movie.

Emmy-winner Robert Ri'chard also co-stars as Benny, an engineering student at NYU about to celebrate his 21st birthday. Benny is upset at his father Ben, played by James Black (The Burning Zone and Anger Management). Benny knows that his father is having an affair with a married woman. It bothers Benny in only that his father stops spending time with him. As a result, Benny starts to spend time with Darryl. If you've seen Ri'chard in Showtime's Feast of All Saints (2001), there is a similar relationship between Ri'chard and an older male, role model with obvious homoerotic undertones.

D.B. Woodside (Lucifer and 24) plays Detective Thomas. He's called to investigate the death of Darryl Graham whose burnt body was pulled from his apartment after it was consumed in a fire. He's a determined guy who puts pressure on everyone in the building.

It turns out a lot of people in the building are suspects. Weber's script generates reasons why all these people would have motive to kill Darryl, making the whole thing a bit of a guessing game. There are of course a few red herrings and one or two patsies. The truth is more in line with the recent Gone Girl (2014). 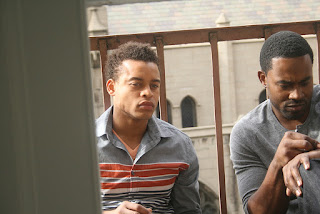 Directed by Trey Haley, this movie is not as bold or graphic in its filmmaking as Gone Girl. Haley instead crafts this movie in a fast and economical way as all the other movies by Tri Destined Studios. It's mostly light and fluffy. The movie never drops below Jackée Harry sitting on the front stoop of the apartment building doing a similar shtick as in her Emmy-winning role in NBC's 227. Even a suicide scene is more comical and ridiculous than deep or depressing.

Haley doesn't need to be David Fincher though. It's not as much of a demarcation for this movie to embrace its clear and obvious melodrama, its soap-opera aspects. Haley and Weber do make great use of Billy Dee Williams.

For the most part, this movie was a fun opportunity for a lot of the actors to work together again. Many of whom have crossed paths either in previous movies by Tri Destined Studios like Four Seasons (2014) and Black Coffee (2014), or various TV shows, some by Tyler Perry. Both Rucker and Ri'chard worked on Tyler Perry's Meet the Browns. Montgomery and Woodside worked on Single Ladies on VH1. 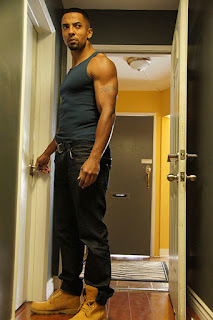 Christian Keyes plays Slim, the unstable and bad tempered boyfriend of Krystal whose role is not that expansive, but Keyes is an actor, singer, author and producer who has been in most of these movies by Tri Destined Studios. He's a regular player in these movies. He along with Rucker are rising stars and should be recognized as such.