Movie Review - Jane Got a Gun 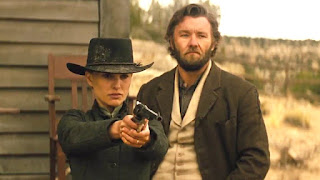 From the way this movie was positioned, it was set up to be in the vein of great westerns like High Noon (1952) or 3:10 to Yuma (2007). Except, it wouldn't center around a man. It would instead center around a woman. It would be about a female gunslinger, similar perhaps to The Quick and the Dead (1995) with Sharon Stone. It stars Natalie Portman who has appeared in the Star Wars prequels, which took a lot from old westerns, so it seemed prime to be a kick-ass western with a woman protagonist. Unfortunately, that's not what this movie really is.

Portman stars as Jane Hammond, the wife of Bill Hammond, an outlaw in the New Mexico territory, 1871, who crosses the Bishop boys, a deadly gang who wants Bill dead. Bill, played by Noah Emmerich (The Truman Show and Little Children), manages to make it back home, but the Bishop boys are hot on his trail. Yet, Bill is severely injured and it's incumbent on Jane to protect Bill and their homestead. This is a set-up for a standoff or a confrontation that could have been awesome.

However, Jane seeks out the help of Dan Frost, played by Joel Edgerton, a skilled gunslinger and ex-lover. It's smart of her to get backup to take on the Bishop boys. Yet, the screenplay by Brian Duffield and re-written by Anthony Tambakis and Joel Edgerton only weakens Portman's character. Instead of being a strong protector, Jane is just a damsel-in-distress.

Time after time, Jane is the one who needs rescue over and over. She does get to make the kill shots in crucial moments, but it always comes with the intervention of a male character. It would have been fine once, but this movie keeps making her the victim repeatedly and it got tired. She should have been the one coming up with solutions alone, but Edgerton's Dan gets most of the clever ideas or saves. It was frustrating.

I almost wish that the movie had gone the route of Alfonso Cuarón's Gravity where the woman has the help of men, but eventually they all go away or are killed and she's left to handle things completely solo. Yet, this movie doesn't do that. It requires Jane to have her hand held until the very end.

It's funny because Portman and Edgerton crossed paths in Star Wars: Episode II - Attack of the Clones (2002). People criticized Portman for her role and performance in that film, but, as an empowered female, she had a greater stance in that George Lucas effort that this one, directed by Gavin O'Connor.

One Star out of Five.
Rated R for violence and some language.
Running Time: 1 hr. and 38 mins.