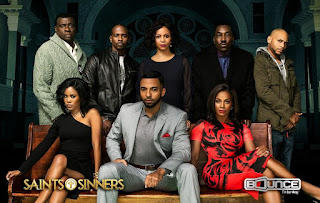 Bounce TV is a digital, television network, which launched in September 2011. It caters to African-American audiences. Some of the affiliates who carry the network include WUSA in Washington, WMAR in Baltimore, WUVP in Philadelphia and WAVY in Norfolk. This series about the soap-opera machinations of a southern church is Bounce TV's first, original drama. It premiered on March 6, 2016, and the 8-episode run did well enough to be renewed for a second season. Created by Ty Scott, it is easily compared to what Lee Daniels and Danny Strong did for FOX's Empire.

Vanessa Bell Calloway (Shameless) stars as Ella Johnson, the First Lady of Greater Hope Baptist Church in Cypress, Georgia, a fictional place outside or near Atlanta. She's married to the founder of the church, Pastor Evan Johnson. She's also a council member who is running for mayor of Cypress. She's not unlike Taraji P. Henson's character in Empire, if she hadn't sold drugs and gone to jail but instead got into politics.

Christian Keyes (Let's Stay Together) co-stars as Levi Sterling, a stock broker who had to leave New York after he got into a Wall Street scandal. He's hired as an executive at Greater Hope when Pastor Johnson gets into financial trouble too. Levi has a teenage daughter named Savannah but he's getting a divorce from his wife. Meanwhile, he's reigniting an old flame with the Pastor's daughter.

Jasmine Burke also co-stars as Christie Johnson, the Pastor's daughter and a doctor who works for the Clinic of Hope associated with the church. She still has feelings for Levi, but, before his return, she was secretly having an affair with the church's choir director.

Keith Robinson (Dreamgirls) co-stars as Miles Calloway, the aforementioned, choir director. If this show is comparable to Empire, it's mostly through Miles who also is trying to record songs and enter the music business. In Episode 5, he even sings "Pain," but there are songs performed by the choir, led by real-life singer Kelly Price. Meanwhile, Miles is juggling his wife, Tamara, played by Demetria McKinney, and hopes she doesn't discover his affair.

The performances from the cast are good. They're not as over-the-top as in Empire but still fun. Keyes and Robinson worked together recently in an independent film, Four Seasons, now on Netflix, where they played friends. Here, they play rivals of a sort, which is good. It could have been great, but the writing lets them down a bit. Miles wanted the executive job that Levi gets, which creates some tension and bitterness, but the show drops it as a conflict after Episode 2. More could have been done with it. The two characters don't really have scenes together after that.

Clifton Powell (Ray) also co-stars as Rex Fisher, the resident villain. He's the leader of a gang that most likely sells drugs and other things, but Rex's chief business seems to be as a loan shark. It's how he ensnares the Pastor. When the Pastor is brutally murdered, Rex becomes the chief suspect. The first, eight episodes are driven by that mystery of who killed the Pastor.

One of the most interesting things about the show is how it delves into the issues behind a church's finances. Not a lot about church business is done, so this show sheds a light on some of the dirty work. For example, the Pastor's funeral has musical performances, performers who have to get paid, according to agents and managers. When Levi doesn't approve the budget of those performers, it causes problems, which is interesting.

Having just watched House of Cards and The Good Wife, the political stuff here just doesn't measure up and feels as silly as things in Empire. It's perhaps on a level of Scandal in terms of tone but certainly not of scale, and it quickly falls apart after Episode 3. The plot reaches the point of absurdity in Episode 6.

JD Williams (Oz and The Wire) plays Jabari Morris, one of Rex's men, his second-in-command in many ways. When Jabari tells Levi that the Pastor's debt is now his, as a businessman, Levi should have asked for loan papers or official paperwork. When Jabari beats up Levi, Levi should have reported it to the police.

There's no explanation as to why he would go along and why he would be intimidated. The revelation of the murder mystery in Episode 8 was extremely clunky. The motivations and actions of the characters weren't built up well enough. All of a sudden, everything was just dropped, landing like a ton of bricks. It just wasn't seeded or developed well. The series also opens with a drive-by shooting that isn't developed well either and isn't felt at all.