Movie Review - A Hologram for the King 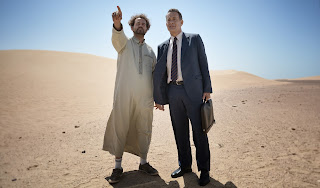 Tom Hanks stars as Alan Clay, a businessman from Boston, a salesman in fact who is working for an IT company that is developing a holographic, telecommunications system. Apparently, the king of Saudi Arabia is interested in buying this system, so Alan goes to that country with a team of three people who will give a presentation about the system to the king. While there, Alan deals with jet lag, bureaucracy, culture clash and issues concerning his daughter. Based on the book by Dave Eggers, a critically-acclaimed novel, the film is essentially a man overcoming a mid-life crisis and rediscovering himself. It ultimately becomes a kind of romance, but one that feels tacked on. It also paints Saudi Arabia at the same time in a romantic light in that it glosses over a lot of the problematic things about the Middle Eastern country that would be antithetical to Americans and American culture.

Sarita Choudhury co-stars as Zahra Hakeem, a female doctor who treats Alan when he goes to the hospital because of a cyst that forms on his back. She also helps him when he suffers from panic attacks. It's pointed out that female doctors rarely treat male patients uncovered or without some buffer. Yet, she does. There's no explanation as to why she's the exception. She appears to be a woman of wealth and privilege, despite the fact that she's separated from her husband. It makes it appear that women aren't as oppressed as one would assume. Her kids are adult and out of home. At first, she's very professional, but she then starts to show romantic interest in Alan.

Besides being the star of this movie, I don't get her attraction to him. It's highly unprofessional as a doctor for her to get involved with a patient anywhere but especially here in Saudi Arabia where there are a lot of stricter, cultural roadblocks. Is it because he's a non-Muslim, so he's not beholden to those roadblocks? Or, does she actually like him for reasons that don't seem evident to us?

At one point, the movie lays out why a non-Muslim like Alan might find himself in danger in this country. People assume he's CIA. He's forbidden from going to certain places like Mecca. There are not First Amendment rights for example, so a foreigner has to be very careful. Alexander Black who plays Yousef, the reoccurring taxi driver for Alan, jokes about terrorism and is so glib about public executions, or even xenophobia. Yet, those things are real, but Alan and this movie exist in a bubble that ignores those things but that doesn't make them go away.

In one scene, Alan is taken to a building that is being renovated. Inside, he passes by people who seem like vagrants or squatters, not the types who could afford residence in a luxury building or a fancy hotel like the Hyatt where Alan lives. These struggling or underground people are never addressed. They're just passed and ultimately ignored, which is an overall description of how this movie operates.

This holographic technology isn't even explored. It becomes this cool thing to see in action for a few seconds with a holographic Ben Whishaw, but why it's needed or why it's wanted when video-conferencing is just as effective isn't explored. Is it just because the king is rich and wants fancy things? Isn't it applicable only if multiple people have it? It seems like a boondoggle without an explanation.

The movie tries to comment on the economy at large, but it becomes lost in a sea of literal, topless snorkeling or the running gag of Alan constantly falling down. It's a trifle of a movie.

Two Stars out of Five.
Rated R for some sexuality/nudity, language and brief drug use.
Running Time: 1 hr. and 38 mins.