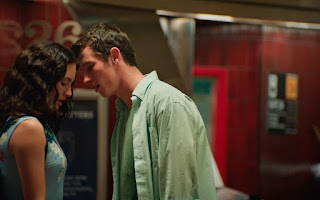 Writer-director Adam Leon made Gimme the Loot (2013), which is about two young people, veritable teenagers in New York, who spend a short amount of time together, really 24 hours. They're involved in an illegal activity, which forces them to reconcile their feelings and decide if they want to be together as lovers or whatever. This movie is Leon's second feature and the screenplay functions the same way as Gimme the Loot. In fact, the title of this movie could be Gimme the Loot because that's what the characters are also trying to do.

Callum Turner (Queen & Country and Green Room) stars as Daniel, a guy who lives at home with his Polish-speaking mother. He speaks Polish fluently too. He's out of school and works in a kitchen as a cook. He gets a call from his brother in prison to do a job, which could pay a lot of money. Daniel doesn't want to do it, but he's pressured into it. His job is to pick-up a briefcase and deliver it some place.

Grace Van Patten co-stars as Ellie, a stripper from Pittsburgh who is desperate for money. She has some kind of relationship with an older guy named Scott, played by Mike Birbiglia (Sleepwalk With Me and Don't Think Twice). Scott is the one who gets her to help with the briefcase job. She's assigned to be the driver for the guy picking up the briefcase. It's never explained why Scott couldn't do the job himself, and why he hires her.

The job, which seems very simple, goes wrong obviously and this makes Daniel and Ellie have to spend the day together trying to fix what went wrong and finish the job. What results is that the two walk from here to there and talk to each other. It could be compared to Richard Linklater's Before Sunrise, but it doesn't have nearly as much intelligent conversation and has this slight, heist-movie kind of hook that doesn't have the kind of stakes that Leon might want and that would make this movie the least bit interesting.

Without those stakes, this whole movie feels a tad contrived. The ultimate ending to this movie feels selfsame. Unfortunately, Leon gives himself a higher hurdle in this movie than in his last. The two characters in his last movie already had known each other, so that love story is more believable. Here, Daniel and Ellie are strangers at the beginning, but we're supposed to buy in a short amount of time, less than a day, that they're so in love that they would run off to Providence together. It's a gap that's not impossible to bridge, but Leon doesn't do enough to build that bridge.