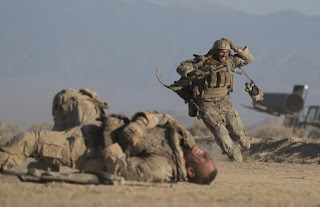 It's a cross between Joel Schumacher's Phone Booth and Kathryn Bigelow's The Hurt Locker. It's set in 2007 during the Iraq War and it's about an American soldier who is trapped in one location with a serial-killer sniper threatening to end him if he moves from that one location. In terms of message, it's the antithesis of Clint Eastwood's American Sniper. Eastwood's film is all about jingoism and using the Iraq War as an avatar for revenge due to the tragedy of 9/11. This movie doesn't cheer the U.S.'s effort's in Iraq and it certainly doesn't cheer its protagonist unlike Eastwood who did so for Chris Kyle. Instead of a patriotic feeling, this movie is meant more to have us wallow in guilt or regret.

Aaron Taylor-Johnson (Kick-Ass and Savages) stars as Sgt. Isaac, an army sniper who is assisted by Staff Sgt. Matthews, played by John Cena (The Marine and 12 Rounds). They are hiding on a rocky hill among shrubs overseeing a desert landscape and a site where a pipeline was being built, except all the contractors working there have been shot dead. Even the soldiers protecting the contractors have also been shot dead. How Isaac and Matthews got there is never explained. They know enough to take cover but not enough to determine where the killer sniper is or if he's still there. Why Isaac and Matthews didn't bring back-up is also lost on me.

If you can suspend your disbelief for the beginning of this film, it settles into a survival story. It's a tense thriller where you're on edge about how Isaac and Matthews will escape the killer sniper. As in the 2002 Schumacher film, the majority of the dialogue is between the good guy and bad guy where the good guy is basically held hostage by the bad guy.

Schumacher's film occurs over the phone. This film, directed by Doug Liman (The Bourne Identity and Edge of Tomorrow), occurs over a short-range radio. Written by Dwain Worrell, a staff writer on Iron Fist, the words of the killer sniper named Juba, voiced by Laith Nakli, could be seen as taunting or demoralizing.

There isn't much empathy or sympathy to be mined for Juba. Yet, the dialogue between Juba and Isaac in particular is meant to bring out America's frustration and guilt with the situation. The War in Iraq as a whole could be distilled down into the stand off between Juba and Isaac, though it's less of a stand off, as it is a quagmire or imbruglio. It could also be seen as a trap, one supposedly of America's making.

Liman's film is a bit subtle in making reference to Edgar Allan Poe's "The Raven." In some regards, this movie could be an interpretation of that poem. Certainly, imagery is implanted here as well as certain themes and ideas, and it would be easy to compare Juba to Poe's raven but who quoths more than "nevermore," and a chamber door is replaced with a hand-stacked, stone wall that Isaac hides below. Sadly, the ending to this movie is just as bleak and dark as the ending of that poem.