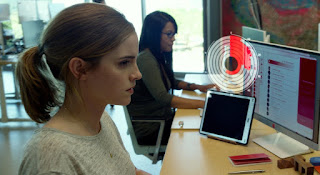 For fans of Star Trek: The Next Generation, the characters called the Borg became the series' most popular villains. The Borg were basically humans all linked together through technology. Their bodies had extensive cybernetic implants and their brains were wired or even wirelessly connected to one another with machines that create one hive mind, all thoughts, feelings and knowledge shared. For anyone wondering how the Borg could have evolved into what they are, this movie provides a clue.

Spiritually, it's the opposite of Oliver Stone's Snowden, yet both end the same way. There's a paranoid character in the center of each. The difference is that the protagonist in Snowden ultimately rejects the technology. Here, the protagonist embraces it. The argument in Star Trek: The Next Generation was for individualism, which the technology in that series' eliminated. The technology in this film doesn't eliminate individualism at least not ostensibly. The argument here as in Snowden is for privacy.

Actually, the argument here is against privacy. Written and directed by James Ponsoldt (The End of the Tour and The Spectacular Now), this film is based on a novel by Dave Eggers. The book, more than the film, bumps up against issues of privacy at several turns and makes fairly good reasons as to why privacy is not the valuable commodity that most believe. It makes good reasons to justify mass surveillance, not from the government but through the public. Yet, by the end, it's unclear if the movie believes privacy is something worth having or not.

Its tone is perhaps wrong. It wants to be a thriller, but that's only a masquerade. It's more a drama about social media taken to its extreme, not unlike the episode of Black Mirror entitled "Nosedive." This movie could be seen as a prequel to that Netflix episode. Yet, Ponsoldt doesn't seem to know what he wants us to feel about his protagonist or the situation. At first, we're meant to feel creepy about it, almost as if we're being recruited into a cult, but, by the end, it's supposed to be the ultimate solution. It's a tonal swing Ponsoldt doesn't totally nail.

Emma Watson (Harry Potter and the Philosopher's Stone and Beauty and the Beast) stars as Mae Holland who gets a customer relations job at an Internet company called "The Circle," which seems like a combination of Facebook and Google. The Circle even has a headquarters, which is similar to Googleplex or Apple Park. It's like a college campus but designed in a round pattern. She's a smart and plucky girl. She seems confident but she has issues regarding her ailing father, played by Bill Paxton in his final film role before the actor's untimely death. 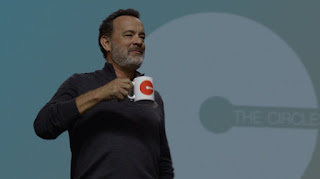 Age aside, Eamon is supposed to be a kind of Svengali, charming Mae and indoctrinating her into his philosophy that mass surveillance and the forfeiture of privacy is the way to better humanity. Yet, there never is any struggle. There never is any dispute on her behalf. She's on board from the beginning and stays on board till the end. In fact, she becomes more of an advocate of his philosophy than Eamon. If this movie were about Mae's ascendancy over him, then it would be one thing, but the movie makes so little use of Eamon as to be truly effective. 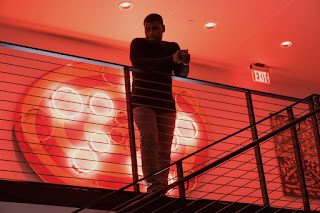 John Boyega (Star Wars: The Force Awakens and Attack the Block) is another actor that the movie makes so little use. It seems like he might be a love interest for Watson's character, but any kind of romance goes nowhere.

Ellar Coltrane (Boyhood and Barry) plays Mercer, an ex-boyfriend of Mae. He mocks social media and the Internet. He's set up to be a victim of social media too, but the movie never really makes it clear how. Supposedly, he gets death threats. Presumably, those threats were posted online, but since Mercer never goes online, it's unsure how he even knows about them. When people come to his house, it's unclear why he doesn't just call the police.

There is a case to be made that what they do to Mercer is tantamount to cyber-bullying and cyber-stalking. There's also a civil lawsuit that can be made about what happens to Mercer. His family could end up owning The Circle. The movie doesn't want to deal with the ramifications of the consequences it creates, and not just legal ones but also the idea that advertisers and corporations would want to take advantage of this system for profit-motives.