TV Review - Master of None: Season 2 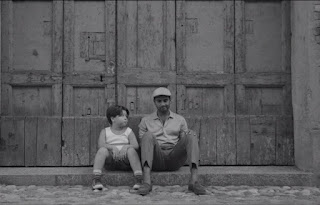 Aziz Ansari won an Emmy for his Netflix series. He's now back for another go round. He utilized black-and-white photography last season but only briefly. This time, he does an entire episode in b&w. He does his version of Vittorio De Sica's The Bicycle Thief. He runs from here-to-there in this Italian city of Modena with an adorable, chubby, little boy named Mario and searches not for a bicycle thief but instead an iPhone thief. Smart phones and their various texting and app capabilities have been the staple of Ansari's comedy lately, as it perhaps rightfully should be. There is also a bit of irony in his use of b&w. The first piece of technology seen is old alarm clock, totally mechanical, not electronic and Ansari's character has no clue how to use it, which shows a little about how lost he is without digital apparatus at his finger-tips.

Despite an Indian man who goes to a European country to learn how to cook and meeting a white woman there whom he fancies, this series does not turn into The Hundred-Foot Journey, which is a shame. This big deal is made about Ansari's character, Dev Shah, learning to cook or possibly being a chef. The depiction of that is next to nothing and his pursuit of a possible career in the kitchen is essentially dropped and the character goes back to being as aimless as before.

The second episode "Le Nozze" seems to be a riff on Michael Winterbottom's The Trip where the majority of it is two men eating here and there. Ansari is joined by Eric Wareheim as Arnold, his tall, shaggy friend. The problem is that Ansari and Wareheim are not Steve Coogan and Rob Brydon, which is fine if the comedy or gags can stand independently. This episode is just the two hanging out and Ansari and Wareheim don't have enough to keep us interested in sticking with them without any plot.

The third episode "Religion" is probably the episode that has the potential to be the boldest, as Ansari attacks religion, specifically Islam. In the episode, Dev challenges his parent's beliefs and their practices as Muslim. He in particular goes against their expectations that he himself be a good Muslim and not eat pork, even though he loves eating pork. Unfortunately, Ansari hired his real parents to play his character's parents and his real parents are not the best actors, so when Dev confronts them, he's not able to have the dramatic impact he could have, if he were going up against real actors. 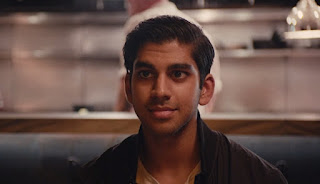 Harris Gani who plays Dev's cousin, Navid, ends up being the takeaway from that episode. He looks like a fashion model. He's so gorgeous, but he's smart and funny and he breaks the rule Ansari established back in the previous season of having more than one Asian on screen at a time, especially if that Asian is from India. Other than Gani though, there's not much here. The Mindy Project does the idea of an Americanized child trying to satisfy her traditional, Indian parents a lot better in Season 4, Episode 18 of that show.

The fourth episode here felt like a waste of time or the show spinning its wheels. The fifth episode starts the season's primary focus of Dev's love affair, though never a physical affair, with an Italian girl named Francesca in Modena who visits Dev in New York when she and her fiancé visit, probably because her fiancé Pino does business there.

John Legend does a very beautiful rendition on piano of the song "Sexy" by Mary J. Blige and Jadakiss on her 1999 album Mary. It sets the mood for the romance about to blossom between Dev and Francesca, but a shot of Dev alone in the back of a cab portends a repeat of last season's bittersweet ending. It's a shot though that is a bit too long and way too indulgent.

Speaking of indulgent, the sixth episode "New York, I Love You" is in a way a homage to Emmanuel Benbihy's franchise, which collects short films set in a particular city. This episode consists of three, short films and all but one is good. The middle, short film follows a deaf girl who works at a convenience store and it's brilliant. The girl communicates through sign language and from that, hilarious jokes are crafted. The climactic joke involving children doing ASL was even more brilliant. Sadly, the other, short films in that episode are practically garbage. 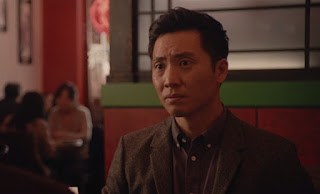 Kelvin Yu who plays Brian is featured more in the seventh episode but in a way where he's only commenting on someone else's story line. It's a shame that he isn't given one of his own. Yu works more as a writer and producer on Bob's Burgers but he's of Taiwanese descent and given the lack of Asian representation, Yu having his own story line would have been appreciated.

The eighth episode "Thanksgiving" is structured similarly to the episode last season "Mornings," which kept returning to the same time of day over the course of several weeks or months. Here, the "Thanksgiving" episode keeps returning to the same holiday over the course of 20 years. Dev spends the Thanksgiving holiday with his friend Denise Watkins and her family starting in the mid 1990's and going to this present year. It charts Denise discovering her sexuality, coming out to her mom and bringing her girlfriend home.

Angela Bassett guest stars as Denise's mom and the episode provides a great platform for her to shine. The episode is almost told exclusively through Bassett's point-of-view. This is at once a blessing and a curse because Bassett is fantastic but in reality the episode should have been told through Lena Waithe's point-of view. Waithe plays Denise. It's just a missed opportunity in the wake of Moonlight, which won the Oscar for Best Picture, to tell a story through the eyes of a black queer character, in this case a lesbian.

In the sixth episode, we get a short film following a random doorman but Ansari and Alan Yang, his co-writer, miss the opportunity to follow Denise. Her girlfriend visits for Thanksgiving, which is the first time the audience sees her. Yet, it would have been nice if we saw how Denise met her girlfriend prior to this, or what Denise went through on days other than the holiday. The episode gives us a lot about her character but does so without Denise's point-of-view. Yet, the eighth episode does utilize New Edition's "Can You Stand the Rain" in a very effective way. 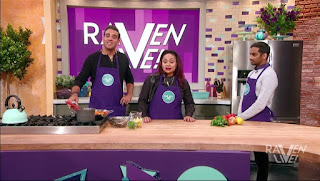 The ninth and tenth episodes focus on Dev and Francesca's relationship. However, the way these episodes play it's as if nothing was learned from the first season. The ninth episode is just one scene after another of romantic-comedy mush that exists to be cute and nothing else. Ansari hopes to win everyone over with sheer cuteness and no depth. I couldn't tell you why Dev and Francesca supposedly love each other and why Dev would pursue her or feel anything for her given the situation. Yet, they're in love, so who cares?

Bobby Cannavale (Will & Grace and Nurse Jackie) co-stars this season as Jeff, a celebrity chef who Dev works with on a TV show. His role was an interesting one. His role coincides with a guest appearance of Raven-Symoné that was compelling on several levels. 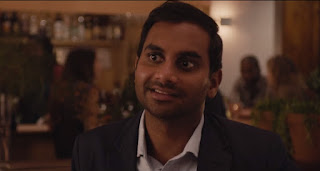