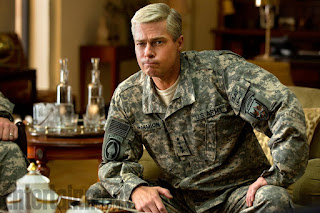 In 2010, Stanley A. McChrystal resigned as Commander of ISAF, a security mission in Afghanistan created by the United Nations in December 2001 to help rebuild Afghanistan and train its army to beat back the Taliban insurgency. McChrystal only had the job for a year before an embarrassing article in Rolling Stone magazine exposed him as being disrespectful to certain people in the White House, including President Barack Obama.

In 2012, Michael Hastings, the reporter who wrote that article, published the book The Operators, which details his time with McChrystal, based on hours of audio recordings. Writer-director David Michôd (Animal Kingdom and The Rover) adapts that book into this film focusing on a fictionalized version of McChrystal and his disillusion about winning or succeeding in his ISAF mission or even if the so-called mission makes any sense.

Brad Pitt stars as Glen McMahon, a general who is the McChrystal surrogate in this story. He arrives in the summer of 2009 to give an assessment about what to do and develop a plan for counter-insurgency in Afghanistan. The narration from another character reveals Glen's spartan reputation and his formiddable drive, as well as the team he's assembled around him.

The movie makes Glen out to be a comical figure, one that should be mocked. It's a quirky and at times subtle character, and Pitt is good at walking the line between quirky and subtle. If one is to mock him, it's for his tunnel-vision. Initially, he repeats that everyone in Afghanistan has forgotten they're fighting a war, which indicates maybe what everyone else fails to see or what only Glen himself sees.

In the movie, Glen encounters people who push back or challenge his myopia, but he refuses to acknowledge the objections or the reality of the situation that continuing the war in this Muslim country is not a good idea. There are plenty of ways that he bumps up against it. One way is through a very lackadaisical, Afghan president, played by Ben Kingsley (Gandhi and House of Sand and Fog) and another is through a very skeptical and untrusting, German politician, played by Tilda Swinton (Michael Clayton and The Chronicles of Narnia).

Lakeith Stanfield (Get Out and Short Term 12) co-stars as Cole, one of the marines who is assigned to the unit that Glen wants to use in order to retake Helmand Province. Cole points out that he and a lot of soldiers can't tell the difference between the good Afghans and the bad Afghans. Even with the good Afghans, he and the other soldiers have trouble convincing those Afghans that the U.S. soldiers are good.

By the end, the movie seems to take aim or satirize the war on terrorism, as well as the various problems with the War in Afghanistan and counter-insurgency in general. It satirizes these things much like Stanley Kubrick's Dr. Strangelove satirized the Cold War, but at the same time, this movie wants to be a quasi-biography of McChrystal. The movie unfortunately never squares the two. For starters, it's not as funny as Dr. Strangelove. Michôd crafts some good, comedic bits. Glen's ignorance when it comes to computers or electronics and Glen's running in high-shorts every morning were funny but in limited supply.

Pitt's performance is also solid, along with all of the other actors. They're all funny, but the script itself could have used more jokes, and it ultimately doesn't build to anything like Kubrick's film. What Michôd tries to build is the the blow-up that was the Rolling Stone article, except instead of being a bomb that explodes, it ends up being an inevitable plot point that barely registers. One reason that it barely registers is because of Glen's reaction. Despite being in every scene, Glen is still kept at a distance, so we're not really sure of his reaction. 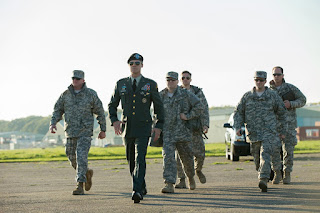 A reflection of that distance is the way the other actors are treated in this film. The opening narration lays out that Glen has a team of men who follow him throughout this film. While the actors who play this team are good, more could have been done, meaning I'm not sure what this team actually thought about Glen. The narration says they love him, but that one line isn't enough. I needed to see it or hear it from them. There's no scene of the men alone talking to each other.

Emory Cohen (Brooklyn and The Place Beyond the Pines) plays Willie Dunne, one of the soldiers in Glen's inner team. He's called a "body man," which basically means he's Glen's personal assistant. At the end, Willie has a moment when he's about to cry or he's at least highly emotional about Glen leaving. It was only at that point that we saw the aforementioned love. Until then, Willie is just a lackey who either says "yes sir" or "no sir." Besides the fact that he's probably based on a real guy, there's no point to him in the narrative, which is why I wish Michôd did more with him because Cohen is a tremendous actor.

The same could be said of RJ Cyler (Power Rangers and Me and Earl and the Dying Girl) and John Magaro (The Big Short and Not Fade Away). The characters are inconsequential. They should have been given more or their characters should have been eliminated or combined. My preference would be for the former and not the latter. Given the movie is already over two hours, that preference may not be suitable, but this is a Netflix original, so length shouldn't matter too much.