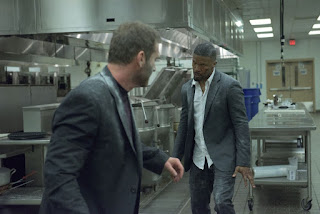 This is a remake of the 2011 French film by Frédéric Jardin. It was similar to The Raid: Redemption (2011) in that it was an action film that was set all in one building where one man has to fight his way through it. As ridiculous as it was, The Raid: Redemption was more believable than Jardin's movie. It strained credulity for why the characters would be trapped, running around this one building all night long, but at least Jardin's film had the courage of its convictions. Jardin's film was a desperate father and a corrupt cop who is redeemed through his tireless efforts but who isn't totally vindicated. Because Oscar-winner and uber-charmer, Jamie Foxx is the star here, having him be a straight up bad guy felt like something Hollywood wouldn't allow, so the reaction is to make Foxx look like a bad guy but actually be a good guy, which waters down the desperate urgency of the whole thing.

Jamie Foxx (Collateral and Ray) plays Vincent Downs, a detective with the Las Vegas Police Department. He and his partner steal 25 kilos of drugs from a drug dealer who runs a casino. That casino owner somehow finds out who Vincent is and kidnaps Vincent's son, Thomas. The casino owner then holds Thomas hostage and threatens Vincent to return the drugs he stole. Vincent loses the drugs and has to get Thomas back without them. Thus begins a lot of foot chases and hand-to-hand fights, as Vincent has to get his son and escape the casino without getting killed.

In the original film, the reason Vincent has to go through all this is because he's a corrupt cop and he can't ask for help. In this movie, it's revealed that Vincent isn't corrupt. He's only pretending to be corrupt. He claims to be undercover, which could be a lie that the movie juggles but it turns out to be true. If that's the case, then nothing Vincent does makes sense. It's not as if he needs the drugs for money, so why wouldn't he just stop and call for help?

The screenplay by Andrea Berloff undermines the premise in significant ways. Instead of coming up with different or more inventive, action scenes, the movie attempts to recreate the same action from the first, including the infamous kitchen scene. Unfortunately, the direction by Baran bo Odar doesn't do it justice, especially if you've seen the original. There is a final action scene, which only ramps up the preposterous nature of the whole thing, but by then it's a bit of a letdown.

Rated R for strong violence and language throughout.
Running Time: 1 hr. and 35 mins.