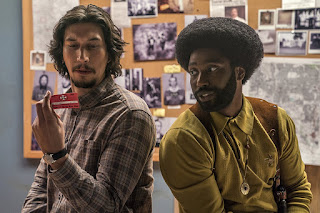 Director Spike Lee adapted the memoir of Ron Stallworth, the real-life, black police officer who is the only known African-American to become a card-carrying member of the Ku Klux Klan, or KKK. It's a somewhat interesting story on its own, but Lee uses Stallworth's experience to criticize the 45th President of the United States and his connection to the KKK, as well as Donald Trump's rhetoric in support of white supremacists or white nationalists, particularly in the wake of the events in Charlottesville, Virginia back in August 2017. In fact, Lee timed the release of this film to coincide with the anniversary of that Charlottesville event, which turned violent and deadly.

However, the violence and deadliness of the KKK or white supremacists aren't felt as seriously in this film. In effect, Lee's film is a satire of the KKK, much in the same way the KKK was satirized in Quentin Tarantino's Django Unchained (2012). As Lee's film progresses, the N-word is used very frequently and noticeably so. So much so, it reminded me of Lee's criticism of Tarantino for his frequent use of the N-word in Django Unchained, but at least Tarantino never undersold how violent and deadly the racists in question were.

Here though, Lee doesn't make clear the physical threat until the very end of the film via a very effective and powerful monologue delivered superbly by Harry Belafonte. Yet, that threat feels disconnected from the rest of the narrative. As weird as it sounds, the threat feels disconnected from the main characters, or the two central protagonists. There is a lame bomb sequence toward the end, but it wasn't effective in selling the danger, especially when the majority of the blame falls on a character named Connie, played by Ashlie Atkinson, who is such a caricature that she can't be taken with any kind of seriousness. 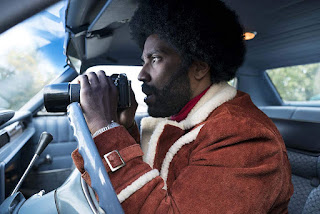 John David Washington (Ballers and Love Beats Rhymes) stars as Ron Stallworth, a black officer in the Colorado Springs Police Department. In real-life, Stallworth was the first, black officer in Colorado Springs, but, in the movie, there already is a black policeman doing his job interview. Ron has a desire to work undercover, but it's never stated why or what he finds most appealing about being undercover. He's initially assigned to a desk job doing paperwork in the records department, which highly frustrates him after joining the police, but his desire to be undercover is there before being hired, so it's not the frustration that singularly motivates him.

Ron decides to respond by phone to a KKK ad in the newspaper. He then continues talking to KKK leaders by phone, gaining their trust and even getting them to approve his membership in their organization. It's not like Ryan Gosling's character in The Believer (2002) in which a Jewish man joined a white supremacist group because he became indoctrinated to Neo-Nazism and to bigoted views. It's also not like Samuel L. Jackson's character in Django Unchained or Uncle Ruckus in Aaron McGruder's The Boondocks.

Ron is simply trying to get intelligence on the KKK for any illegal activity or violence it might commit. Yet, Lee never establishes the KKK's history of illegal activity and violence. Yes, we hear them saying very racist and horrendous things, but so what? The KKK is a racist and terrorist group that probably needs no introduction, but, as depicted, I never felt the danger from the KKK group. Yes, they're a bunch of hateful rednecks and it's not as if their intentions are a secret, but the fact the KKK would kill black people is not something we see here. I get the impulse not to show it, but at the same time, I can't feel what I'm supposed to feel here, beyond understanding it intellectually, and when I go see a movie, I go to feel not just simply have intellectual exercises. 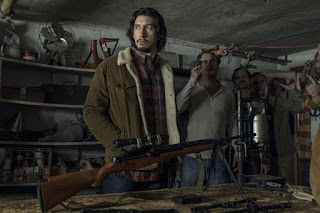 Adam Driver (Logan Lucky and Star Wars: The Force Awakens) co-stars as Flip Zimmerman, a Jewish officer in the Colorado Springs Police Department. He works for the Intelligence division. He's recruited to pretend to be Ron after Ron is invited to meet the KKK in person and not just on the phone. Ron continues the phone conversations but Flip does the face-to-face.

It might be against what is in Stallworth's book, but having the bifurcation of Ron talking to the KKK by phone and Flip talking to the same people in person presents two practical problems. Both problems are addressed in the film, but the first problem is the voice of Ron not being the same as Flip's voice, and the KKK noticing that vocal difference. However, the way this movie addresses that vocal difference, as well as the difference between how white people talk as opposed to how black people talk, or King's English versus jive, is better here than in Sorry to Bother You. Here, it's not a full-on dissection but it is a slight analysis of diction and syntax, which is more than what Boots Riley bothered to do.

The second, practical problem is the idea that whatever Ron says by phone is something that Flip has to mirror in person. Yet, we never see Flip listening to those conversations, but it's assumed that Ron relays those conversations to Flip off-screen. Flip doesn't have to do the reverse because Ron follows Flip and has him wear a wire when he's meeting the KKK face-to-face.

Those two, practical problems could be alleviated if Flip himself spoke to the KKK by phone and in person instead of having Ron do any speaking. Arguably, it would have taken away Ron's agency, but logically Ron's voice isn't required, so why have it? It could be Ron's ego or ambition at work, but the movie never really dares to depict Ron as anything other than righteous. 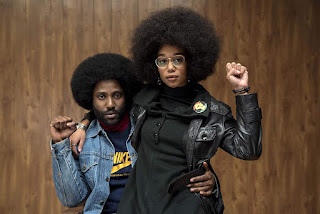 Lee's film barely scratches the surface in examining the idea of Ron's blackness. Laura Harrier (Spider-Man: Homecoming) plays Patrice, the president of the Black Student Union at Colorado College. She invites Kwame Ture aka Stokely Carmichael, played by Corey Hawkins (Straight Outta Compton and Kong: Skull Island), to speak at her school. Patrice reinforces Kwame's revolutionary language and the adversarial relationship with the police whom Patrice calls "pigs." At one point, we hear someone yell during Kwame's speech, "Fuck the police!" It echoes the language in the recent blockbuster Straight Outta Compton (2015), a film that saw a black cop be just as complicit in the abuses against black people as so-called racist, white cops.

Kathryn Bigelow's Detroit is the last film to examine the idea of how complicit a black cop can be among white cops, especially those who look the other way during racist abuses. This movie had the opportunity to examine that idea too, as well as delve into a black cop's sense of identity when caught between these two extremes. Ron doesn't see the parity between the police and the KKK. Patrice does, but that parity isn't made as strong a theme. Lee is instead less concerned with drawing a line between the police and the KKK as he is with a line between David Duke, played by Topher Grace (That 70's Show), and Donald Trump.