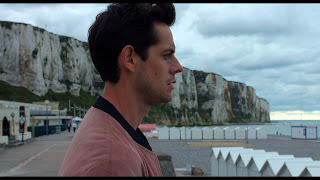 This isn't like My Week with Marilyn (2011), which was a biographical look at a guy who had a run-in and experience with a movie-star. James Dean isn't a character who appears in this movie, not even as a hallucination, such as when Cary Grant appears in Ian Iqbal Rashid's Touch of Pink (2004). No, here, the title isn't literal. It's metaphorical. The question is what the metaphor is. Maybe it's just a metaphor for being in a relationship with an actor. The main character here is in a relationship with a movie star, a French movie star, not unlike James Dean, but that fact is rather obscured for a good chunk of the narrative. The main character here is in fact a filmmaker and in this narrative his film has the same title, so there's some kind of meta-commentary happening. The protagonist talks about having James Dean as an imaginary friend when he was a child but we never see that childhood and it's never clear what the reason is for him having that imaginary friend. Otherwise, this movie does stand as some sort of semi-autobiographical statement.

Johnny Rasse stars as Géraud Champreux, a filmmaker from northern France. He's made a movie called Ma Vie avec James Dean and a group named Coastal Screens has invited him to play his movie at certain locations along the English Channel, starting at the resort town of Le Tréport. He's a rather quiet and unassuming man. He rides the bus into town and doesn't have the best of luck upon his arrival. He gets robbed. He doesn't get the best hospitality at his hotel. The woman organizing the event is flaky. The concierge could care less and hardly anyone shows up to the theater to see his movie. This generates a feeling of ennui that isn't helped by the fact that the star of his movie who is also Géraud's lover is distant or they have some issue, which while he's there causes Géraud to drift, befriending a possible new lover.

Given some surrealist and comedic elements, there is an air to this film that vibes with something like Federico Fellini's 8 1/2 (Otto e mezzo). This film isn't as imaginative or bizarre as that Fellini classic. It's not as dream-like. If anything, this movie leans more toward Alex Karpovsky's Red Flag (2013). This movie is less about the glitz and glamour of being in the movie business, but there is a similar listlessness as in Fellini's 8 1/2, but it's not about stifled artistry or unfinished or unachieved art. It's more about the frustration of art that is finished and achieved but then dealing with less than stellar receptions or the receptions you might not expect. 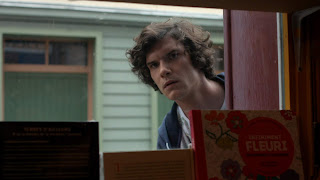 Mickaël Pelissier co-stars as Balthazar, the young projectionist at the theater in Le Tréport. He's also the ticket taker. Based on nothing, he says he's fallen in love with Géraud. He begins to follow him. Some might call it stalking. He's ostensibly a cinephile and his infatuation with Géraud could be another metaphor for a certain kind of cinephile or a certain kind of fandom that should be eschewed. As such, Balthazar could himself be a spoof of sorts.

Or, maybe writer-director Dominique Choisy sees it as fandom he wants but doesn't know what to do with. Otherwise, Balthazar is a young, gay kid whose virginal eyes are latching onto the creator of a gay film, mainly because Géraud is within reach or within Balthazar's grasp. Choisy's film in general could be a metaphor for same-sex love. Choisy introduces a subplot between two women in love, two lesbians as it were. I'm not sure of the meaning of this subplot, but, at one point, one of the women indicates that love isn't always as depicted in movies and Choisy might be getting at some theme about perception versus reality. 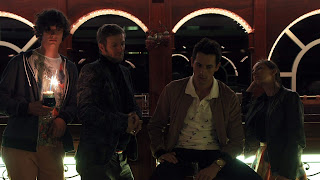 The ending also quite confused me. It seemingly concludes on a happy note, literally referencing a Bollywood musical-style ending, but what precedes is a bit of a head-scratcher. There are some back-and-forth about whether Géraud and Balthazar will be together. An issue of age-difference arises, but it's brushed over. The movie pivots on two more poignant moments involving the parents of Géraud and Balthazar. Both have issues with their fathers in particular, but that's rather brushed over too. Its denouement involves another subplot involving what seems like a homeless man named Milad, played by Tajamul Faqiri-Choisy. What that represented never landed for me. It's a mystery that remains such unless I'm just too literal to get it.

Not Rated but contains sexual situations and language.
Running Time: 1 hr. and 48 mins.