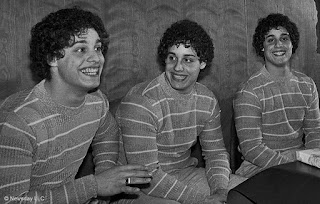 Tim Wardle's documentary opens up a lot of questions. Some of those questions are questions that won't be answered until 2066 or ever. Other questions could be answered, but Wardle seemingly has no interest in exploring them. It also states something that is intuitive from the beginning but Wardle places it at the very end and the statement is left as almost a dangling participle that has no impact, ultimately doing a disservice to the subjects in the title. As one might guess, the titular subjects are triplets, all three boys, genetically the same. The wrinkle is that all three boys were separated at birth and adopted into three different families in the New York area without any of the families being told their baby was one of triplets. The boys didn't realize they were triplets until they were 19 and two of them happened to cross paths by going to the same college randomly. The third learned he was related to them when their photo was plastered all over the newspapers.

What's revealed is that the agency that arranged the adoptions was in league with a researcher connected to a powerful Jewish organization. That organization decided to separate twins or multiples so that the researcher could study the effects or issues of human nature. The brothers call the group behind the study evil. They call their separation not justifiable and compare what happened to them to the Holocaust and what the Nazis did, which seems a tad bit harsh and hyperbolic. Yet, Wardle has no interest in exploring why it might be evil or not justifiable.

The movie seemingly is critical of adoption at least in part. The first bone of contention is the idea that the reason the triplets were separated was due to the notion that triplets are difficult to place together as a set. Wardle doesn't debunk or verify that notion. He could have interviewed an adoption expert who could have spoken to that notion, but no such luck. 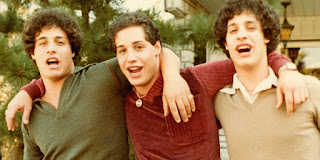 Another bone of contention is the fact that the brothers weren't told they had brothers, particularly as triplets. They argue that because of this, they had problems growing up. They talk about having separation anxiety, but they were separated as babies, which they don't even remember. Yes, in many closed adoptions, adopted children aren't told about their birth mother or father, as well as any half-siblings they might have. Again, there are no adoption experts in this movie who can speak to that effect. Is not knowing one's twin or triplet any more or less harmful than not knowing one's sibling in any other form?

There's an issue regarding the medical history of one's biological family. No one would argue against denying a person their biological family's medical history and what could or couldn't be passed down. However, there is no adoption expert to speak to how or if that medical history is shared in regular adoptions or even closed adoptions and if doing so can be done without knowing anything else about one's biological family and the ethics of it. Given that it's also revealed that the triplets' birth mother had a history of mental illness and the triplets are revealed to also have mental illness, having that information denied to them seems particularly egregious. Yet still, could they have had that information without knowing the name of their birth mother or anything about her?

One of the brothers named Eddy Galland is diagnosed as manic depressive later in his life after meeting his triplets. This is only briefly discussed given that that particular brother dies prior to the filming of this documentary. Another brother named David Kellman mentions being in a mental facility, but that's all he says. He never goes into details. Doing so would have provided insight into that brother, distinct from the others. Yet, Wardle glosses over it. 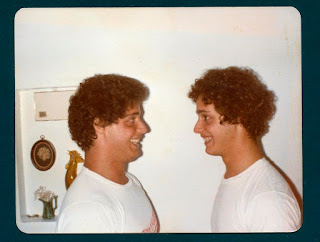 This is indicative of the movie's overall problem. When the first, two brothers meet, they're amazed on how identical they are. Wardle shows the photo of the two meeting. Again, everything after that amazes on how identical they are. However, if you look at the photo, it's clear that they're not totally identical. One looks slightly taller than the other, though that could be due to wearing higher shoes. One brother is slightly fatter than the other, or else the other is skinnier. One's body type is different than the other, probably based on diet. It might be a minor point, but the movie ends stating how the boys and those around them overlooked whatever differences they had.

That might be a clever point to make at the end, but that means the movie can only make that point by overlooking those differences too. Wardle interviews the two surviving brothers and it's obvious that those two are different in their looks and personalities, but that's at present after seeing how both have aged in divergent ways. The notable differences would have to be during the time in dispute when the boys were young and the movie doesn't do that.

Instead, the movie wastes time chasing after the researcher and the group behind the study. It's a logical avenue to pursue, but once Wardle learns that pursuing it leads to no solid answers, leaving it in the movie feels like a waste. It's time that could have been devoted into delving into the lives of the brothers. 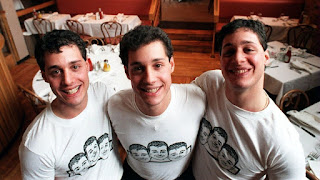 For example, the movie replays a video clip of the boys on TV with Phil Donahue and people ask them questions to which they all answer yes. One of those questions is if they all have the same, favorite color. All three answer yes, but we never learn what that color actually is. That might seem like a superficial thing, but it's indicative of similar issues in this movie of mostly treating the boys superficially.