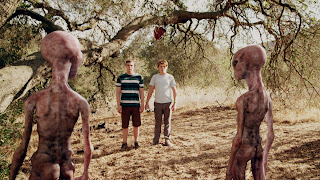 Writer-director Alexander Murillo makes his feature debut here, and it feels like in several ways he's trying to craft his own version of Super 8 (2011). Instead of being set 30 years in the past, his movie is set in the here and now, and it centers on what might happen if two teenage boys, two brothers, stumbled upon an alien invasion or the existence of extraterrestrials here on Earth. Of course, these aren't the cute and cuddly aliens of Steven Spielberg's E. T. the Extra-Terrestrial (1982). There are the more hostile aliens of The X-Files. However, instead of being the little green men of that series, the aliens here are taller perhaps, slender or emaciated like a zombie but still similar head and eyes as the aliens depicted in The X-Files. Yet, like The X-Files, Murillo mostly keeps the aliens obscure or off-screen. Instead, the focus is more on the boys' discovering their existence and the rest of the town dealing with the aftermath of the alien's presence.

To that end, this movie felt like the episode titled "El Mundo Gira" in which the presence of extraterrestrials was linked to an old Latin or Hispanic legend, the chupacabra. Murillo has a scene where a character introduces that idea too, linking aliens to human legends. In another scene, the two boys enter a Native American reservation, which also felt similar to the episode of The X-Files titled "Anasazi" in which the presence of extraterrestrials was linked to Native American culture and history. Murillo seemed on track to bring this linking idea into his movie, but he doesn't develop these ideas any further than those aforementioned, passing references. 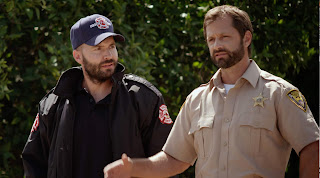 Jed Sura stars as John Neery, the sheriff of some rural town. He's a widow with two teenage sons. He is remarried to a soccer mom. Sheriff Neery is the equivalent to Kyle Chandler's character in Super 8 who was also a widow and a sheriff. The difference here is that Sheriff Neery has remarried and has two sons, not just one. Sheriff Neery's one hang-up is that he wishes his younger son were more outgoing.

Miles Muir co-stars as Shawn, the aforementioned, younger son of Sheriff Neery. Shawn is obsessed with space exploration. It's strange that he eschews technology like smart-phones and social media. He believes they're his generation's distraction from more important technology like rocket ships, aeronautics or even astronomy. As a result, Shawn has come up with Operation Moon Balloon, an experiment of lifting a camera toward or even into space.

Karson Kern also co-stars as Michael, the older brother to Shawn. He's actually on Spring break from college and is visiting his family. He's also agreed to help Shawn with his experiment, which basically means driving his little brother in his red, Ford SUV into the outskirts of town. Michael of course teases his brother, but it's clear he loves Shawn and is happy to help him.

When Shawn and Michael talk, their conversations have two interesting points of contention. The first point is about their late mother. Shawn thinks his father is trying to replace her with the soccer mom. The second point is about how the brothers feel envious of each other. Shawn is jealous of Michael for being a popular jock and Michael is jealous of Shawn for being smart and so intelligent. Given the science-fiction or even the horror aspects aren't as strong as in Super 8 or Stranger Things, most likely due to budget, the thrust would have to be these conversations. Unfortunately, Murillo doesn't make these conversations as dramatic as this movie needed. 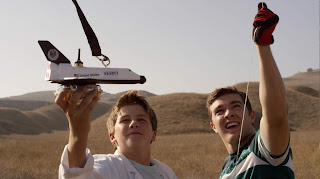 Shawn and Michael's wandering about the landscape for Operation Moon Balloon is counter-balanced with Sheriff Neery investigating the mystery of strange attacks and deaths, as well as other odd occurrences. That mystery is effectively creepy, and it feels like Murillo is building toward something spectacular or the occurrences would culminate in a fantastic vision like the ending of Super 8 or like Close Encounters of the Third Kind (1977), a bright lightshow for example, but Murillo subverts that expectation and ends his movie rather unceremoniously and rather inconclusively.

Not Rated but for general audiences.
Running Time: 1 hr. and 27 mins.

Available on DVD and VOD via Breaking Glass Pictures.