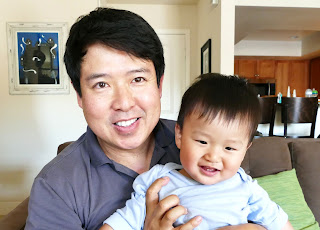 Quentin Lee has directed several features, including White Frog and The People I've Slept With. He's a Chinese filmmaker. He moved to Canada as a teenager. He got his Master's degree at Yale University in English and at UCLA in Film Directing. He started making movies in 1992. He's helmed over a half-dozen. He's in his mid-forties and he's now embarking on his biggest project. He's becoming a father. The wrinkle is that Lee is single and gay, so that makes becoming a father doubly difficult but not impossible. Lee decided to do surrogacy and the most interesting thing he says about it is that he sees surrogacy or the science of making a baby as akin to making art or specifically like making a film. He basically says making a baby is like making a movie.

Lee created a six-episode web series that streamed starting in June 2017 that followed him through the surrogacy process and the first, six months of his baby's life, as he works to raise his newborn son on his own. Along the way, we meet a cast of his colorful friends and family. He then took those six episodes and combined them together for this autobiographical feature. 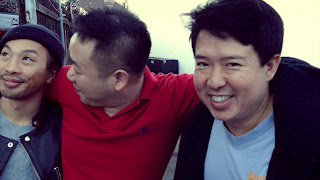 Through which, we are introduced to the people closest to Lee. This consists of his two best friends who drink, argue and bicker in the loudest and funniest ways. It also includes actors and actresses who work with him on films, as we get a peek behind-the-scenes of how the director and dad juggles both job titles at once.

From divas to diapers, we get the breadth of what Lee has on his plate now, although he doesn't have to handle the typical diva. The famous women, like Tamlyn Tomita whom he directs, aren't divas in attitude. They're down-to-Earth and personable. They're not all about the glitz and glamour or being a personality. They're more like a family with Lee, which remains a strong theme in this movie.

However, there is something incredible that happens toward the end of this movie that's worth mentioning. Without spoiling too much, Lee returns to his father's home in Vancouver, Canada. Lee returns as a father himself, so to spend time with and possibly get advice from his own seems apropos, but it doesn't quite turn out how one would assume. In fact, he's practically ditched by his dad on Christmas and Lee concludes by the end that he's glad he didn't take his dad's advice. 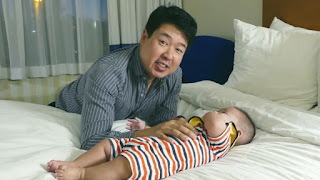 The reason Lee has this divide and disconnect from his dad goes to choices about what a child decides to do with his or her life, vocation-wise, as opposed to what the parent might want. It's not unique to Asian parents but many children of Asian immigrants have commented on this subject. One's parents will always prefer their child pursue a safer career, one that likely won't fail like a career in medicine or the law. Pursuing an art or a career in the arts like Lee can be tricky and result in failure. Most parents like Lee's dad would rather have their child planted firmly on the ground. Lee, however, disagrees and would rather have his child reach for the stars and that's up to the individual parent on how you choose to raise your child. With this movie, Lee shows us that split.

As a bonus feature, placed in the middle of this movie, Quentin Lee also shows us the short film that he made with his friends Candy Cheung and Jerry Hernandez (Ethan Mao). At first, it seems as though it's just going to be behind-the-scenes footage of Lee's project, but no. We get to see the actual short film that he made called On Halloween (2016). It's nine minutes and it's a very good take on When a Stranger Calls (1979) or Wes Craven's Scream (1996).

Not Rated but for general audiences.
Running Time: 1 hr. and 34 mins.


Premieres at the New York Asian American International Film Festival on August 2.
Available on VOD on August 3rd via Amazon.