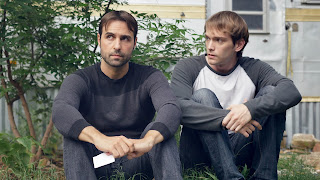 Anthony J. Caruso's feature debut is an adaptation of Salvatore Sapienza's 2013 novel Seventy Times Seven, a more obscure title unless you're very familiar with the Bible, specifically Matthew 18:22. "Seventy Times Seven" comes from an exchange between Jesus and Peter about forgiveness. Ditching the title makes sense though, given that Caruso's film isn't about forgiveness at all. Forgiveness, however it's rendered in Sapienza's book, is not the driving force or any kind of force here. Perhaps, if Caruso had decided to set his feature in the 1990's as Sapienza set his novel, that forgiveness theme could be a consideration, but Caruso sets his feature in the present and doesn't make homophobia an issue at all, so there's nothing to "forgive" in this movie.

If it's not homophobia, then one has to wonder what the central conflict is in this movie about a gay man who is deciding to make a life for himself working in the Catholic Church. Again, it's not homophobia because it's made clear that all the Catholics, including the so-assumed priests and friars, in this story have no problem with the protagonist being gay. There's some question of whether the main guy will take the job in the church and fully become like a friar, but the stakes don't feel as dire as maybe the book presents. The only other question is the one in countless romantic comedies and that's the inevitable and often predictable "will they or won't they." 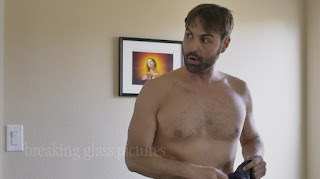 Caruso not only writes, directs and edits this feature but also stars as Vito Fortunato. Vito seems to be in some kind of seminary but he's openly gay and proud. Vito is walking a path laid down here by countless others, including Father Mychal Judge, a celibate priest identified as gay posthumously. Judge was known as "The Saint of 9/11." He isn't directly referenced in the film but he was well-known to Sapienza. Judge was an advocate for LGBT rights within the Catholic Church. Judge also started an AIDS charity in Manhattan. Yes, there were people who denied Judge's homosexuality. Yes, he got some pushback from the Catholic Church on certain things. However, he worked and lived seemingly unencumbered.

Yet, Sapienza's book and by extension this movie challenge how unencumbered Judge's life actually was, if not from an external standpoint than from an internal one. This movie could even come across as a rebuke of the mendicant order or at least some aspects of the consecrated life. Vito and the men in his order are called "Brother." They're friars, men who take the same vows as monks but don't cloister themselves. Instead, they can live in the world to counsel others or to evangelize, but they do take the same vows as monks, that of poverty, chastity and obedience. 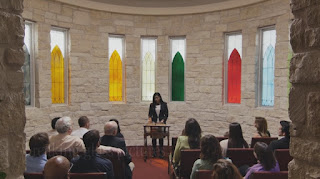 We never see Vito grapple with wanting not to be in poverty or wanting not to be in obedience. We only see him grappling with wanting not to be in chastity, and if the argument were just about sex, there would be no argument. Masturbation would simply be the solution. The argument is rather about love and the need sometimes for one human being to touch and be intimate with another, caring for that other in every sense. What briefly develops is an interesting argument of what love can mean for someone who chooses to be celibate and what that might mean for someone who is asexual. Can one have love without sex? For some married couples when they get old, the answer is yes, but could that same love occur for young men in their prime like Vito?

At first, Vito argues that it is possible to divorce sex from love and that he can have love in his life without the kind of sex or intimacy that the average person has or desires, which is presumably how Father Judge lived his life. However, when Vito visits Austin, Texas, for the summer to volunteer at a AIDS charity house, he encounters person after person who practically argue the opposite. That alone would have been fine, but Caruso's movie seems to go a step further to suggest that anything other than a monogamous, sexual relationship is less than fulfilling in life. Caruso's movie seems to suggest that celibacy can't be fulfilling, at least celibacy in terms of non-intercourse, which again flies in the face of the life of Mychal Judge. He was celibate, which Caruso's film suggests wasn't fulfilling. 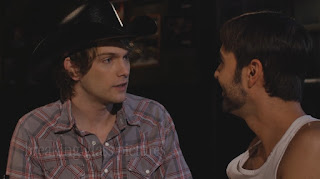 Derek Babb co-stars as Gabe Rimes, a landscaper in Austin who does the lawn and garden for the AIDS charity house. He's recently divorced, having broken up with his wife after realizing he's gay. His parents disowned him. After being somewhat lonely, he sees and takes a liking to Vito and asks him out to a country-western spot. Another character mentions love-at-first-sight, which is basically what happens to Gabe upon his initial meeting of Vito.

Otherwise, it's not really clear why these two would fall in love. The two don't seem to have much in common. Vito likes to go to bars with his friends. Gabe doesn't really like the gay nightlife. Gabe is more a beer person, whereas Vito is more a wine person. Gabe is a Cat Stevens fan, but Vito's not into it. One of Vito's favorite movies is Yentl (1983), but Gabe isn't into that film at all. Gabe doesn't get most, if not all of Vito's pop culture references. The exception is a mutual knowledge of Golden Girls but they jokingly say that that's knowledge all gay men have, so it's not underlined why these two are attracted to one another other than for purely lustful reasons.

It could be the cliché that opposites attract. Vito is more extroverted, gregarious and charming, whereas Gabe is more introverted and perhaps more guarded. It's perhaps not so confusing why Gabe would be taken by Vito but it is confusing why he would do so to the exclusion of other guys. When another, sexy guy named Jim, played by Oryan Landa, shows interest in him, Gabe brushes it off. Vito makes it clear that he's celibate and is avoiding any kind of relations. Gabe then makes a comment about wanting what you can't have. That's Vito in a nutshell, which may fuel Gabe's attraction, but it's being unnecessarily aggressive and forward for someone whom you know would have to break vows and violate their personal beliefs just to be with you. The naughtiness of that could also fuel Gabe's attraction, but that's not what Gabe's personality seems to indicate at all, so I don't get Gabe's almost instant devotion. Normally, in any romance, the two characters would undergo some trying situation that would bond them or one would engage in some act that directly helps or assists the other. Beside watching TV, that doesn't really happen for these two. 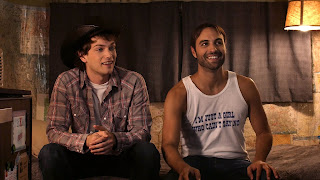 Sometimes, two people spending a lot of time together in close quarters can cause bonding, but Caruso doesn't properly orient us to the passage of time. A character merely enters and says two months have passed, but, in no way does the filmmaking here make us feel it. It probably doesn't help that the majority of this movie is interior shots. Aside from the opening scene, which drags a little too long, killing any sense of rhythmic pacing, the movie never really ventures outside. All those interiors, mostly between two people, mostly kill any sense of perspective and scope to this narrative.

For example, Vito is allegedly supposed to be working at the AIDS charity house, but we don't actually see him doing much of anything. He talks to one of the residents there, an elderly man named Joe, played by David Blackwell, a HIV-positive, former TV scribe, but other than that, we have no clue what Vito has been doing all summer. We have no clue what his work is. When the people at the charity throw him a party, it feels unearned. The movie gives us no sense of Vito's days beyond his conversations with Gabe. 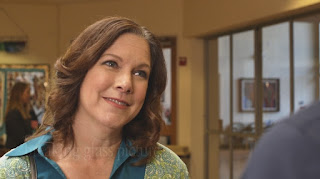 Peggy Schott plays Gloria, a former nun who is now in a lesbian relationship. The movie pivots on a conversation between her and Vito. She claims her life with her girlfriend is more fulfilling than her life with Christ. She says her lesbian love has brought her closer to God because she feels happier and healthier. Yet, she never defines what that happiness or health is. She implies that her happiness comes from her monogamy to a pretty hedonistic woman. 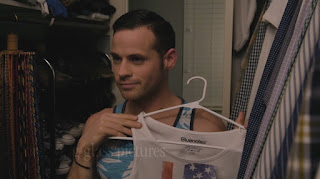 Chance McKee plays Tim, the best friend to Vito. McKee is the comic relief who buoys the first 30 minutes of the movie. The humor and effervescence really sink for the middle hour where he disappears. It's sad that Caruso couldn't have a found a way to keep McKee's presence in the film constant like Lil Rel Howery in Get Out (2017). Tim is also the voice of reason too who predicts the ending, making that middle hour essentially pointless. It just would have been nicer to have his character around more. McKee is not only very cute. He's very funny.

Not Rated but contains a scene of strong sexuality and nudity.
Running Time: 1 hr. and 56 mins.

In theaters August 3 at Laemmle Music Hall.
On DVD and VOD on August 7.