Nick Ferrucci stars in the independent film The Falls (2012). He acted in the movie during the summer of 2010 after he graduated from Southern Oregon University with a Bachelor's degree and before he left to Northern Illinois University (NIU) where he is currently working on his Master of Fine Arts in acting. He'll complete his MFA in May of 2013. In my review of his film, which was released on DVD on December 11, I praised his work as exemplary and quite accomplished, if not showing great promise for him as an actor in the future. I was taken aback when Ferrucci told me over the phone that he regretted filming the movie before going to graduate school. While he knew the basics of performance, looking back after nearly three years in grad school, he modestly admitted that he didn't know nearly as much about acting as he could have.

I gave the movie and Ferrucci's performance five stars, which, if I were one of his professors at Southern Oregon, would have translated as an "A" grade. Yet, hearing this actor who was between schooling be critical of the work he did made me doubt my initial feelings about his performance and made me think that maybe I should have been more critical too. It also made me consider going back and possibly lowering the grade I gave to Ferrucci's performance.

All of this got me thinking though about acting, what it is and how do we perceive and judge it, both from the actor's perspective and the audience's perspective. As I started thinking about it, I was instantly drawn into the controversy surrounding Quvenzhané Wallis, the child actress in Beasts of the Southern Wild, and whether or not she should get an Oscar nomination for that movie, which she made at age 6.

Film critic Scott MacDonald wrote an article for The Atlantic titled "Sorry, Quvenzhané Wallis, but Best Actress Oscar Nods Are for Big Kids." In it, MacDonald argues that no child is capable of acting. He writes that child actors merely play themselves. They don't make conscious efforts to adopt a persona other than their own. He writes that the audience responds to a child actor's innocence and lack of self-consciousness, in other words, genuineness.

Aisha Harris, a writer for Slate, responded the next day to MacDonald's article with her blog entitled "Yes, Children Can Act." Harris basically deconstructs MacDonald's arguments, believing that MacDonald implied that in order to be an actor, one must be studied and trained, and old-enough to rationalize every decision they made while in front of the camera. Harris contends that rationalizing doesn't matter, and that it's not important how an actor got to his or her performance. It only matters that he or she got there at all. Harris' argument is basically the ends justify the means.

Ferrucci told me that at NIU he learned the Meisner technique. The technique is a fuller and deeper way of understanding acting, developing character and performing that character in the most truthful, honest and real way possible. Ferrucci expressed regret because he didn't know or hadn't yet been versed in the Meisner technique while making The Falls, which I assume was his first leading role in a movie. 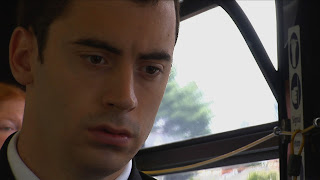 It seems to me that Ferrucci is looking at it from MacDonald's point-of-view. When he looks at his performance, it's all about rationalizing the decisions. As an actor, this is probably normal, if not inescapable. Ferrucci might look at what he did on The Falls and think he could have done it all better if he had Meisner. Better perhaps isn't the right word. If he had Meisner, his performance in The Falls would have probably been different, but would those differences have been more effective or moved me just as much?

I look at it from Harris' point-of-view. I'm not a studied actor. Nor do I know the Meisner technique. I don't or can't see the flaws that Ferrucci sees. All I know when I watch a performance is if the actor involves me or pulls me into the story and makes me believe what he or she says or feel everything he or she feels. In the case of Ferrucci, the answer is yes to all. He made me believe everything he was saying and made me feel everything that his character was supposedly feeling. In the case of Quvenzhané Wallis, the answer is also yes to all.

Am I saying that Ferrucci is no better than or just as good as a 6-year-old girl? Being that the 6-year-old might be nominated for an Oscar when the 85th Academy Awards are announced on January 10, 2013, I don't think it's a comparison Ferrucci would mind.

The Falls is about two college-age Mormons who come to live together as part of their required missionary work, which involves them going out daily to proselytize to as many people as possible. Ferrucci stars as RJ Smith, your average, mild-mannered, male Mormon with wholesome parents, a sister, a girlfriend with whom he hasn't been pass first base, an interest in wrestling and basketball and who prays everyday.

Ferrucci is not a religious person himself. He's also very liberal in his political views. He said he did grow up around Mormons and their specific, quirky behaviors fascinated him. When writer-director Jon Garcia sent the screenplay, Ferrucci had no problem saying yes to doing it.

Ferrucci drew from the Mormons he knew growing up. He would have preferred to have done more research into Mormonism than that and get some factual information. He said it would have helped for the earlier scenes, but his lack of research and perhaps any unfamiliarity, if it came through on screen, worked because his character is a kind of freshman and rookie in the missionary scene.

That rookie status really is apparent in a scene where Ferrucci and his co-star, Benjamin Farmer who plays Chris Merrill, are on the street. The scene requires the two of them to interact and improvise with unsuspecting pedestrians in Portland who are non-actors. Ferrucci said many people didn't want to talk to them, understandly so, but he said that it was fun to see how his character responded to that.

Ferrucci's character of RJ responds as a rookie would, a rookie in the sense that this felt like RJ's first time as a Mormon doing something like this on the street, whereas Merrill felt like a veteran, like a person who has done this forever. I don't know if Garcia's script or his editing afterward made the two of them seem that way, but my impression of Garcia from a YouTube video interview he did about the movie as well as from talking to Ferrucci is that Garcia gave them a little information but then unleashed the two actors without much direction and simply followed them like a documentary.

Ferrucci said he was nervous while shooting the street scene. He said he could feel people's irritation and that he felt bad about bothering even the people who were nice enough to stop and talk with him, and all of this comes through on screen. RJ seems nervous. RJ seems hesitant and guilty about bothering these unsuspecting pedestrians. It makes me wonder how Ferrucci would have handled this situation if he had the Meisner technique. What would he have done differently?

That street scene was not indicative of the whole movie. It probably represented the most freedom that Garcia gave to Ferrucci, but the actor did get more moments of freedom here and there. Ferrucci said he and Garcia had a great relationship in that he felt comfortable coming to Garcia and offering suggestions. Ferrucci said it was a really friendly and safe environment that way. 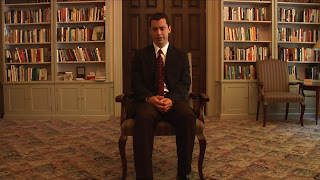 Garcia apparently didn't bark orders. Ferrucci said Garcia nudged his actors toward where he wanted them to go but nothing was forced. In a few instances Garcia didn't yell, "Cut!" He let the actors keep going and discover things that weren't in the script. Ferrucci included that the scenes with Brian Allard who plays an Iraq war veteran that RJ and Merrill frequently visit as part of their missionary work are examples. Ferrucci said that this was probably because everyone recognized that Allard is an accomplished stage actor who is a full creative person. 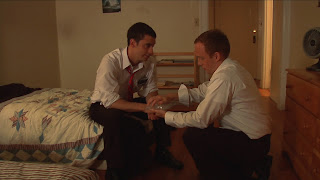 Another example of Garcia allowing the actors to keep going and discover things is a scene where RJ and Merrill return to their apartment after a missionary visit that doesn't end well. Merrill is upset and RJ essentially has to comfort him. Ferrucci said the script had the scene close more dramatically, but playing with and improvising it, Ferrucci was able to re-work the scene to close on a more comedic note, and I told him that that note is probably my absolute favorite moment in the whole film.

In terms of absolute favorites, Ferrucci said he watched a lot of Jim Carrey movies as a child. He also said he loves anything by Paul Thomas Anderson and Wes Anderson, two filmmakers not related by blood and whom make wildly different films. His favorite actors rise from those who have worked with those two Andersons, including Bill Murray, Philip Seymour Hoffman and Daniel Day-Lewis. Ferrucci added that his vote for Best Actor would go to Joaquin Phoenix in The Master.

It's interesting because The Master is about a man who becomes involved with a religion or philosophy, which some might call a cult, and discovers a little something about himself while also becoming slightly disillusioned or disappointed. It's interesting because there are some parallels or echoes of that in what Ferrucci does in The Falls. Unlike Phoenix's character, RJ grew up in his religion and even in the end wants to remain in his faith, but like with Anderson's film, Ferrucci said they never wanted to make a movie that's anti-Mormon or anti-religion at all.

The Falls is a love story, a love story between two men, which arguably so was The Master, just not the overtly romantic kind of love, and Ferrucci seemed to love working on the project. He spent three weeks in August 2010 on it. He said it was about 10 to 14 hours a day with only one day off, but he never complained. He said he felt like he woke up everyday with these people and was immersed or constantly inside the circumstances of his character. 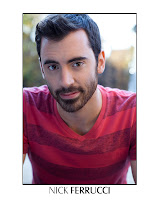 He said that it was like he was just living through it, which he didn't mind. He liked the rigorous schedule. He said there's a danger in being bored. As I wrapped up my conversation with Ferrucci, that's one of the things he said he learned from making The Falls and that he'll probably take with him into his next film project.

He's currently in the Chicago area for school, but he hopes to move back west after he graduates from NIU to be closer to his home state of Washington. He said he might settle in California and would like to do more films. I look forward to seeing those films.