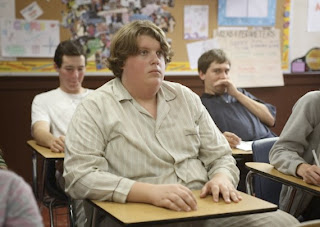 Jacob Wysocki, in his first feature film, is Terri Thompson, an overweight, slightly depressed, teenage male. Is he bullied? Yes. Is there a pretty girl he pines for? Yes. Does he have a quirky friend who hangs out with him? Yes. Is there an adult non-related who tells him things will get better even when his family is troubling? Yes.

This movie fits the bill when it comes to other teen dramadies. There are individual elements that stand out and individual moments that are funny and sweet, but, aside from a hawk eating a dead rodent in real time with no edits or cutaways, this movie didn't really show me anything I haven't seen before.

Oscar-nominee John C. Reilly (Chicago and Boogie Nights) plays assistant principal Fitzgerald, the good-heart, good-nature authoritarian with marital issues. He gets most of the laughs. Reilly is always such a brilliant presence in every movie he does.

This is writer-director Azazel Jacobs' follow-up to Momma's Man (2008), a movie with just as much resonance now as it did when it was first released. That movie though had something poignant to say, something interesting to say. It may not have been astoundingly unique, but it was more unique than what's presented here.

Co-screenwriter Patrick Dewitt doesn't offer much insight into Terri. The situation is revealed that Terri is caring for his elderly and sick uncle. One scene that he has with his friend Chad informs us that Terri has no clue where his parents are, or at least he claims ignorance. At no point does Dewitt indicate the history and what brought Terri here.

We're shown a slice of this boy's life and that's all. There are some instances that were quite amusing, but nothing here was overly memorable.

Three Stars out of Five.
Rated R for sexual content, language and some drug and alcohol use involving teens.
Running Time: 1 hr. and 46 mins.