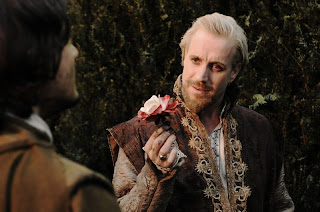 William Shakespeare was born in 1564 and died 1616. He's known as the best and most influential playwright and poet that England or the world ever offered. He wrote about three dozen plays, most notably some of the greatest tragedies like Romeo and Juliet, Hamlet, and Macbeth.

Because of the complicated and ill-gotten way Shakespeare's plays were published and because practically nothing is known about Shakespeare's early life, as well as due to certain dedications and parallels in the writings, theories developed after his death that Shakespeare didn't write any of those, three dozen plays or poems. Collectively, these theories are known as the "anti-Stratfordian theory." Amongst them is one known as the Oxfordian theory, or the Prince Tudor theory, and it's that theory that's the basis of this film.

The Oxfordian theory states that a man named Edward de Vere, the 17th Earl of Oxford, was the true author of Shakespeare's plays. Yet, the plot and conspiracy that de Vere went about to fool everyone into thinking that his plays were written by Shakespeare as well as his reasons for doing it are rather convoluted, especially as depicted in this film.

The story delves into the politics surrounding Queen Elizabeth I. Anyone who has studied such politics will probably tell you that convoluted comes with the territory. The only reason that Queen Elizabeth matters is because in this film Edward de Vere falls in love with her, gets her pregnant, and, at one point, was going to marry her. Yet, one of the Queen's advisors, a man named Robert Cecil, stops that from happening.

Why Cecil stops it and his actions later didn't make much sense to me. It's almost as if the filmmakers needed a villain and drummed up this one. Most of the villain's actions are with the Queen and the Queen's politics have little to do with the plays or the plays' writing. Why so much time is devoted to it boggled me. It does add a layer of intrigue and excitement that people like me who are more interested in the literature aspects don't need.

There's already enough here. Rhys Ifans plays the Earl of Oxford who lives in a culture that in many ways sees the theater as something not all together high class. Art and literature are at times seen as sinful. Literature, however, is something that Oxford clearly loved and about which he was clearly passionate. Director Roland Emmerich (Stargate and Independence Day) never really shows us this. It all comes through Ifans' performance, which is enough. Even though Ifans can only portray it in a couple of scenes, it is enough, but more would have been preferrable.

Oxford decides to give his writings to Ben Jonson, played by Sebastian Armesto. Jonson then publishes and produces the plays under the name William Shakespeare, an actor he randomly encounters. Shakespeare is played here by Rafe Spall. The dynamic that occurs between Jonson and Shakespeare is interesting, and the deception that the two have to maintain is fun.

The last portrayal of Shakespeare that I can recall was the Oscar-winning Shakespeare in Love, where Joseph Fiennes took on the titular role. I enjoyed Fiennes very much, but I also enjoyed Spall as well. He's funny. His character is a bit of a fame whore in more ways than one. He's not as likeable as Fiennes' character was, but there's a humor to him that I appreciated.

Contrasting him to Armesto who plays Jonson more seriously and as a person who is a bit more dedicated and faithful to the art than Shakespeare is fascinating on several levels. Spall's Shakespeare isn't as dedicated or faithful but instead an opportunist. Delving into this portrayal and exploiting it was enough for me. Watching the fun of these two contrasted in this way was what I wanted to see.

Yet, Emmerich goes back to the Queen's politics and gives short shrift to the Jonson and Shakespeare contrast and dynamic. While the novelty of Vanessa Redgrave and her real-life daughter, Joely Richardson, inhabiting the role of Queen Elizabeth at different ages of her rule was interesting to analyze from an acting standpoint, I feel like overall it doesn't add much.

Yes, Oxford loves Elizabeth, but they're hardly together throughout the whole movie. The resulting political fallout just didn't resonate ultimately. The ending just stood as outlandish and over-the-top. Considering Emmerich's past films, this is to be expected.

Three Stars out of Five.
Rated PG-13 for some violence and sexual content.
Running Time: 2 hrs. and 10 mins.