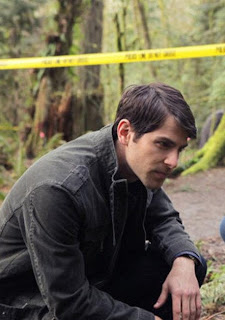 Over the past decade, there have been several TV shows about people who investigate and fight paranormal beings. The X-Files and Fringe are shows that root this premise in science fiction. Buffy the Vampire Slayer and Charmed lean more toward fantasy. NBC's new series Grimm falls somewhere in between.

It stars David Giuntoli as Nick and Russell Hornsby as Hank. Nick and Hank are two detectives in Portland who work on various homicides. Nick thinks he's going crazy when he starts to see grotesque faces on random people he encounters. It's not until his aunt arrives that he learns he's part of a special group of demon fighters called grimms.

So far, the episodes have run like this. Nick sees a demon who of course masquerades as human. He discovers they've committed some horrible crime. He follows them and eventually stops them. Sometimes, he shoots them and that's it. Occasionally, the show deals with a seemingly generic mythology but that mythology isn't really built up in the first few episodes. The demons don't even seem all that particularly scary or special in any way. Aside from the fact that they're killing people, there's not much to them.

Created by David Greenwalt who co-created the Angel series and worked for a year on The X-Files, this show has the same vibe a little. Yet, it's far less fun and Giuntoli is no David Boreanaz. The writing of it is no more layered or complex as a standard police procedural. It's like Law & Order: Supernatural Victims Unit.