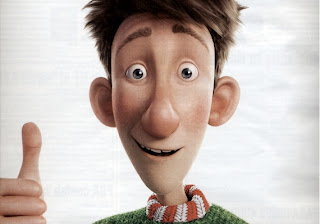 Produced by Aardman Animations, the company behind the award-winning Wallace & Gromit films, this movie has all top-notch, British actors as voices of the characters. All of whom do a great job, but the impressive stop-and-go animation that has been a staple of Aardman has been replaced. The popular and quite common, 3D computer animation is the technique here. As such, nothing visually or design-wise stands out or is any more unique than the characters seen in numerous Pixar or DreamWorks cartoons.

If this movie succeeds, it will succeed on the strength of its writing and overall direction. Director Sarah Smith works from a very clever screenplay that's consistently funny. It may be utterly predictable and doesn't take chances, as many Pixar films have, but this is to be expected coming from a Christmas film, clearly aimed at children, but Smith's direction is solid for keeping the audience on the point of putting ego aside in the name of charity.

A little, British girl writes a letter to Santa Claus. She's clearly a believer in Santa, but the letter asks a lot of simple, logical questions, which challenge the believability of jolly old St. Nick. Yet, the goal of the movie, at least the opening sequence, is to answer all those logical questions. It doesn't refute the magical tradition on which Santa is based. It merely brings the legend into the 21st century. It turns the North Pole into a military operation with advanced technology and the elves into highly-motivated, government employees.

Santa Claus is less like the President or Prime Minister of this so-called military. He's more like a figurehead. He's there on tradition, not because he does any real work. Yet, the elves still sanctify him. Santa's family, on the other hand, doesn't.

Santa's name is Malcolm. His wife, Margaret, loves and appreciates him, but to her, he's just Malcolm. Santa's father, affectionately referred to as grand-Santa, nags Santa and is constantly cranky, scoffing all the new technology. Santa's eldest son named Steve is tall, handsome and well-built, but he's a little narcissistic. Steve is the next in-line to become the new Santa once his father retires, but he's resentful when his father doesn't retire

Santa has another son, a younger son named Arthur. Arthur has true and unwavering faith in Santa. Arthur works in the letters department. He's the one who gets all the things that children write and answers them. He truly is the bridge between what some might consider an obligation, a job, or the monotony of it all and the magic, warm feelings of true grace.

Despite the spiritually, uplifting story, the movie also does a decent job of creating visual gags. The infamous, dry, British wit is also ever present. This movie though is clearly for Christians. Not that people of other faiths can't enjoy the silliness. Yet, the elves of the North Pole at one point ask if the children, any of the children, matter. The implication is all children do matter in terms of gift-giving, but Christmas is a Christian holiday. Arthur visits Africa in the middle of this movie, and Africa has many Muslim countries. They don't celebrate Christmas. Neither do Jewish families.

Therefore, a great line to the elves' question would be all children matter except Muslims or Jews. That line is somewhat offensive, but, perhaps the idea of Christmas has become so secularized that it's been divorced of its religious ties and truly is just a day of materialism. Surely, this movie would have us think every child in the world gets a present, regardless if that child is Christian and regardless of whether he or she is even naughty.

A more bold and more daring choice would have been not to conclude with delivering an inconsequential possession to a girl who wasn't impoverished or struggling, Jewish or Muslim. I love the family dynamics, but the thrust of the story felt a little hollow.