Movie Review - The Ides of March 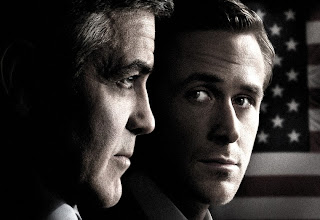 Of all the movies that George Clooney has directed, this one, his fourth, has the least style and has the least flairs. Aside from a few touches, this film is the least interesting to watch. If the movie works, it's mainly due to the actors. Clooney assembles an amazing cast who all deliver remarkable performances. The one problem though is Ryan Gosling, which is unfortunate because he's the main character here.

Sadly, this makes the third film in 2011 starring Gosling in which I haven't liked his character. The first was Crazy, Stupid, Love. I despised Gosling's character in that. The second was Drive. I hated his character or lack thereof in that movie, and now there's The Ides of March. It's not as if I think Gosling is a bad actor. Ever since The Believer (2001), Gosling has provided one solid performance after the other, including his Oscar-nominated role in Half Nelson (2006). This year, however, has been an off year for me when it comes to Gosling.

Gosling plays Stephen Meyers, a political consultant working as second-in-command in the campaign management of Democratic presidential candidate, Governor Mike Morris, portrayed here by Clooney. He works with the head of the campaign, Paul Zara, played by Philip Seymour Hoffman. Meyers comes off initially as idealistic and even romantic about Morris' political views, whereas Zara is jaded and cynical, or perhaps Zara just comes off as a veteran.

The problem with Meyers is that it's established pretty early that he's a "dumb ass." I suppose that it shouldn't be too much of a surprise that he makes two crucial mistakes very early on, but when he's called out on the latter of his two mistakes, his response is to do something completely underhanded. With no explanation or any logic, Meyers throws all that idealism and romanticism right out the window and without even blinking twice.

Another example is the character of Molly, played by Evan Rachel Wood. What we learn about her makes her actions up until the point that we learn about her turnaround puzzling. We're not really given much more to her back story. Wood does an excellent job with what little she has, but admittedly it's little.

The screenplay is adapted from a stage play, which does provide for some great moments of dialogue. Hoffman and Paul Giamatti who play a rival campaign manager named Tom Duffy particularly get some juicy lines. The adaptation does broaden whatever limited scope the play had, but, instead of getting wider Clooney really needed to go deeper.

We get scant information on Meyers and Morris. We get scant information on their motivations. Morris, for example, vehemently opposes Senator Thompson, played by Jeffrey Wright, joining his administration, but not enough is told that gives us any true understanding as to the animosity on the part of Morris. Clooney has a throwaway line about Thompson's position on the United Nations, but it's just not enough.

I will say that Clooney and his cinematographer are fond of silhouettes and shadows. He shoots Gosling in several different characters, each in varying degrees of darkness. The final time Clooney does it is quite effective. It's staged in a restaurant after hours and the scene does build great tension.