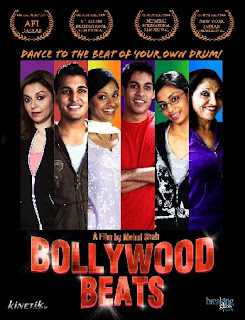 It's a common theme in stories about children of immigrants that their parents push them to get solid professions and not pursue art like acting or dancing. This theme certainly isn't limited to children of immigrants, but it's the theme that pervades this movie. Being that the United States is a nation of immigrants, one could argue that this is as American a story as it is an Indian one.

Sachin Bhatt is a triple threat. He sings. He dances and he acts. He's been on stage and on screen. His first leading role in a feature film was in The Ode (2008), the adaptation of the award-winning novel Ode to Lata, written by Ghalib Shiraz Dhalla, which shed a light not only on the first and second-generation experiences of South Asians but also a light on gay experiences as well.

Bhatt's character here of Raj isn't like his first feature film character, Ali, who had plenty of angst and heartache. Here, Raj is almost the polar opposite. Yes, Raj has his troubles, but his disposition is so much sunnier. Unlike Ali, Raj allows Bhatt to put his dancing skills to the test. In fact, dance is one of Raj's passions, his coping mechanisms and life's blood.

It's obvious that Raj's parents are somewhat wealthy, living quite comfortably in Los Angeles. His father seems to be a well-earned business owner who wants his son to follow in his footsteps, but Raj wants his footsteps to follow those of successful hip hop dancers.

The concern of most parents is that their children will disavow their heritage or ethnic identities. This is not the case for Raj. He embraces Bhangra, which is a South Asian form of music and dance. Raj in fact wears a green, zip-up with the words "The Indian" on the back, just in case you didn't get what his heritage was.

Another concern for immigrant parents is that their children won't be successful and that they will fail. Raj has the same concern. He meets Joyti, a liberal, independent woman, played by Lillete Dubey (Monsoon Wedding) who helps him to start a dance class for Indian women.

He attracts three, Laxmi, a conservative housewife with a cheating husband, Puja, a high school student with an absentee father who prefers science club over Bollywood, and Vina, Puja's grandmother who used to be a Bollywood actress, but might be a little over the hill to be one now. Yes, Raj has concerns of being successful. Who wouldn't with this less than confident collection of people who probably won't lead him to much profit.

Yet, this movie, written and directed by Mehul Shah who also co-stars as Vincent, a young gay Indian whose has intolerant parents, proves very early on that that's not Raj's aim. Raj just wants to do what he loves and that's dance. The movie is set up to be about the women that Raj comes to teach, their lives and how the dance class changes things for them, getting them to try something different, step out of their traditions and customs, and get them to open their minds.

It plays out in that fashion with each dealing with their issues until culminating in a grand musical number. At the end, it goes to what Raj will do and that's whether or not he will pursue his big dream of dancing for Beyoncé or being as big as Hrithik Roshan, or whether he'll continue teaching dance for these women in perpetuity.

Bollywood Beats is like an India-inspired episode of Glee and in the vein of Slumdog Millionaire takes a lot of liberties from Bollywood in that it lacks in the amount of musical numbers. Yet, it's quite entertaining.