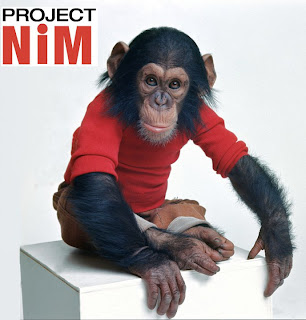 Last year, Project Nim hit theaters a week prior to Rise of the Planet of the Apes and was very much a companion piece. It was very much a real-life example of a primate taken from its mother and raised by humans until the humans decided it was too big and too aggressive, so they locked it up.

Rise of the Planet of the Apes got an Oscar nomination for Best Visual Effects, which it will likely win because it put us right into the mind of the monkeys. Project Nim tries to accomplish the same in that the humans involved are trying to get into the primate's mind.

The story starts in 1973 when a scientist from Columbia University gets a woman to help raise a chimpanzee and teach him sign language. Oscar-winner James Marsh (Man on Wire) interviews these people thirty years later to get their thoughts and feelings about the situation.

Marsh interweaves archival footage with these interviews and some re-creations. Going from footage to interviews, Marsh frequently uses left-to-right dolly moves and so-called "natural" wipes as transitions. Marsh is no doubt great in assembling these things, piecing together a story and finding subjects who can deliver good sound that guides us.

Having us know Nim and how he was adopted by humans helps us to sympathize with animals that are the subject of experiments, both horrible and extreme by the Laboratory for Experimental Medicine and Surgery in Primates or LEMSIP. The filmmaker gets us to despise LEMSIP when it has probably done countless amounts of good, but the point is that certain animals can't be kept as pets the way Nim is, nor be taken away from the biological mother for purposes that don't help them fundamentally. Plus, try as some may, chimps are not humans. Trying to teach them human language or anthropomorphize them as done here is most likely fruitless.