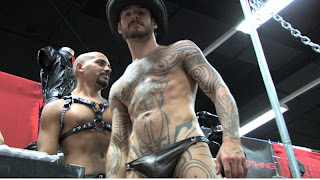 Mike Skiff of Third Rail Media covered the 30th International Mr. Leather contest, which occurred Memorial Day weekend 2008 in Chicago. Skiff shows what the contest is and introduces us to the people involved. He also allows for them to explain why they do it and how it's important to them.

International Mr. Leather or IML is an event that was started by gay, white men in the 1970s. It was initially a kind of beauty contest that was an excuse to parade practically nude men across a stage. At the beginning of this documentary, people are quick to point out that IML is not just that superficial parade any more, but truth be told that it's still mostly that.

On the surface, it looks like men who are thick, mostly buff, hirsute, tattooed or pierced. They are mainly naked, except for strategically-placed leather straps, codpieces or thongs. Everything they wear actually is made of leather like something out of Tom of Finland or a Kenneth Anger movie, i.e. Scorpio Rising, naughty biker boys and the lot. As we hear from these men, we learn that it's not just about the bodies but it's also about the behaviors.

Hearing more from the guy of NCSF or seeing Skiff delve deeper into Pendal's life would have been helpful to understanding the cultural significance of this event and would have put IML in a fundamentally more important context. Skiff follows the day-by-day or hour-by-hour events and merely goes along with IML's itinerary rather than forging his own path. 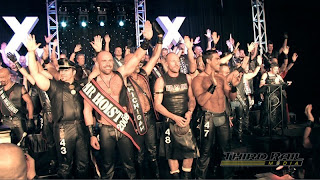 If nothing else, it works as a brief profile of Chuck Renslow, the founder and chief organizer of IML. It also works as slight eye-candy for gay and female fetishists. It also works as a drum for how inclusive and tolerant IML is because of the few black, Asian and even disabled IML contestants.

There also seems to be an emphasis on the lone heterosexual contestant, a guy from Long Beach, CA, named Don Sir. One former titleholder-turned-judge remarks that the IML winner should be a gay man, but bigotry against straight men or straight women is less the problem here. The weekend portrayed is merely a snapshot. It's a chance as someone says for these so-called Kink Crusaders to be who they are out in the open without fear or shame. The irony is that this documentary never really shows us who they are. It's just a snapshot and little more.

Three Stars out of Five.
Not Rated But Recommended for Mature Audiences.
Running Time: 1 hr. and 14 mins.