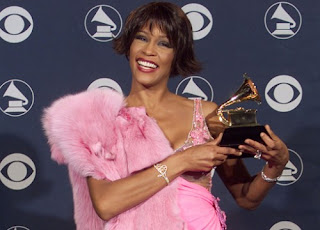 Thanks to Twitter, I learned of the Associated Press' news that Whitney Houston had died at the age of 48 in her Beverly Hills hotel room on Saturday, February 11. She was discovered by a member of her entourage. Cause of death or the circumstances surrounding it are yet to be released, but I immediately turned on CNN, which had pre-empted its normal programming for wall-to-wall coverage of this story.

Weekend anchor Don Lemon was somber and clearly heartbroken. CNN collected tweets from numerous celebrities commenting on the loss of one of, if not, the greatest voices in music that has ever been recorded. Her renditions of "The Greatest Love of All" in 1986 and "I Will Always Love You" in 1992 have been musical gifts unlike any other and record-breaking to say the least.

When Lemon was on the air, he talked to Jane Velez-Mitchell and Dr. Drew Pinsky, both of whom spoke about the fact that Houston was a drug addict. Her substance abuse of choice was crack cocaine, something about which she talked openly with Oprah Winfrey in 2009.

The implication was that drugs were a factor in Houston's death. In the wake of such celebrity deaths as Amy Winehouse, Michael Jackson and Heath Ledger, it was an obvious implication. CNN even aired a live and brief press conference with the Beverly Hills police and one of the reporters asked outright if drugs were a factor in her death. The police responded that they didn't yet know.

All of this comes literally on the eve of the 54th Grammy Awards in Los Angeles. When Michael Jackson died, there was considerably more time before the next award show, the BET Awards to be specific, in order to prepare a proper and more intricate tribute. There was no doubt that Houston's death would affect the Grammy Awards. It was just a matter to what degree.

The show opened, Sunday night, with Bruce Springsteen and the E Street Band doing, "We Take Care of Our Own," a song off Springsteen's forthcoming album Wrecking Ball. It was a great performance. The show then led to LL Cool J, the first Grammys host in seven years, saying smoothly that there is no easy transition. He said simply that there has been "a death in our family." He proceeded to bow his head and say a prayer for Whitney Houston. Many in the crowd also bowed their heads.

A tape of Houston singing "I Will Always Love You" from 1994 came on the screen behind LL Cool J. 1994 was when she and that song won the Grammy for Record of the Year. The tape reminded everyone of that special Grammy moment, a moment that I remember. LL Cool J said that everybody has a Grammy moment that they remember above all others. He name-checked Adele whose Grammy moment was when Aretha Franklin filled in for a sick Pavarotti in 1998.

Having watched the Grammys off and on going back twenty years, I do have my Grammy moments. Unlike the Oscars, the Grammys could care less about the awards. The Grammys have over 100 awards but gives out the majority of them before the telecast. They didn't announce who won Best Jazz Vocal Album for example. The Oscars, as a contrast, have 24 awards and gives them all out during its telecast. The Grammys only gave out two awards in its first hour. Last year, the Oscars had given out about a half-dozen in that amount of time.

The Grammys are basically a three-hour concert, so the majority of the Grammy moments that people remember are the performances, and the Grammys are famous for pairing unlikely acts together. The first such in this show was Alicia Keys and Bonnie Raitt. The two did a beautiful tribute to the late Etta James, singing her 1961 rendition of "A Sunday Kind of Love."

Last year, Raphael Saadiq took to the stage with Mick Jagger. In 2008, Beyoncé and Tina Turner danced along side each other to "Proud Mary." As evidenced, the Grammys try to partner a young act with an older one. This year was no different with Maroon 5 and Foster the People singing along side the Beach Boys who were celebrating their 50th anniversary as a group. But, there are some Grammy moments that aren't performances. There are some Grammy moments that are people actually winning Grammys.

One of my favorite, if not my most favorite, is when Lauryn Hill won the Grammy for Album of the Year in 1999. Some may think me overly sentimental because that award was announced by Whitney Houston herself. It's not my favorite for that reason alone. It's my favorite because it's one of the very few times since I started watching the Grammys that I agreed with the Album of the Year winner. The other times were when OutKast's Speakerboxx/The Love Below won in 2004 and when the Dixie Chicks' Taking the Long Way won in 2007.

If I had to pick a favorite winner for this show, it would have to be when the Foo Fighters won the Grammy for Best Rock Performance. I loved it not because I'm a huge Foo Fighters fan or wanted that group to win over the others, quite the contrary. I loved it because of what Dave Grohl said. It was prefaced a half-hour prior with a rocking good time outside the Staples Center where Jack Black praised the band for its indie cred.

Grohl reminded everyone though when he was giving his speech that their latest album Wasting Light wasn't produced in a studio or financed through a major label. It was instead produced independently, as Grohl says, in his garage. As he held his award, Grohl stressed that music shouldn't be about "what goes on in a computer." Clearly, he was taking a dig at Auto-Tune and the debate over its use.

If I were overly pleased by any other winner, it would be Bon Iver's win for Best New Artist. That win was very much expected, even though some people rooted for Skrillex. Bon Iver doesn't have the name recognition of the Foo Fighters, but Bon Iver also made his debut album independently, not in a garage but a remote cabin. His win was, as he says, "a sweet, sweet hookup."

British pop singer Adele, non-surprising, won the three top prizes, including Song of the Year, Record of the Year and Album of the Year. She got even more chances on stage to offer her thank yous. Aside from the snot at the end, I appreciated her win for Best Pop Solo Performance, specifically her work on "Someone Like You." Since the award recognizes a singer's vocals, Adele felt the need to thank her doctors, a reference to her recent throat surgery.

I love Adele, but her performance of "Rolling in the Deep" at this show wasn't the best that evening. Accuse me of being sentimental again, but I think that that distinction goes to Jennifer Hudson who sang "I Will Always Love You," specifically in tribute to Whitney Houston during the In Memoriam segment.

I was listening to Houston's Greatest Hits CD the night before, which included that song. Radio stations to which I tuned that afternoon, stations like 101.7 FM in Wilmington, paid their respects by playing nothing but Houston songs all day. Around 4PM, I had 101.7 up, as I was driving through Kent County, Delaware, and I sang along to "My Love is Your Love," a song from 1998 where Houston sings about what would happen after her death. It was a song that certainly moved me, but even it didn't bring tears to my eyes until I heard Hudson's tribute.

Earlier that evening, during the E! Entertainment channel's red carpet coverage, it was reported that Hudson got her first Grammy from Houston. In the album notes for Houston's Greatest Hits CD, Amy Linden, a music journalist, wrote a foreword reading, "Since 1985 Whitney Houston has been the female singer that has set the criteria by which we judge contemporary pop/R&B... Whitney is a template, a touchstone." Linden also wrote, "The careers of many female pop/R&B singers have occurred both as a reaction to, or as a result of... [Whitney Houston]." Hudson is clearly one of those female pop/R&B singers, and, as Hudson sang her tribute, you could hear the love and respect that she has for the late icon just vibrating throughout her whole body.

During that red carpet coverage, Ryan Seacrest did a live phone interview with music producer Jimmy Jam who prognosticated that there wouldn't be a dry eye in the house. I don't know about every eye in the Staples Center, but every eye in my house certainly wasn't dry. Of all the performances, this one got the most response. My colleagues at WBOC even weighed in. WBOC anchor Alice Bavis tweeted, "Jennifer Hudson looked and sounded incredible! Class Act!" WBOC Sports Director Scott Abraham also tweeted, "Jennifer Hudson did that song justice. Well done..."

Abraham even questioned me as to how many times Houston would be mentioned at the Grammys. By my count, Houston was mentioned six times. With the exception of Adam Levine who a hour before the show started, during the red carpet coverage, told Seacrest that she impacted everybody and that "She's Whitney Freakin' Houston," the only people who mentioned Houston were African-Americans. LL Cool J opened with the prayer for her. Bruno Mars gave her a shout out. Alicia Keys expressed her love to Houston, as did Rihanna and Stevie Wonder. It ended with Hudson's tribute, which was beautiful and sweet.

It was the exact opposite to Nicki Minaj's performance, which was god awful. Her performance was no where near as controversial though as Chris Brown's. People still want to beat him up for beating up Rihanna and possibly breaking a Times Square window. He danced on a set, seemingly designed by Q*bert, while ripping off Michael Jackson's moves. Taylor Swift gave the third best performance with her song "Mean," while Bruno Mars gave the second best with his song "Runaway" doing his best James Brown-impersonation and screaming to the crowd, "Get off your rich asses!"

Finally, in a possible answering of critics opposed to the recent SOPA / PIPA debacle, Neil Portnow who is the current president of the National Academy of Recording Arts and Sciences trumpeted the charity work of the Grammys to help struggling artists and find a way in the digital age to best compensate them. Responding to that, Dave Homan, a game designer, known on Twitter as @mrlasertron, tweeted this, "**camera pans across crowd of rich riaa dicks who forgive a woman beater but want to imprison people in a gulag for downloading a song.**"

As a contrast, I thought it was interesting that the Grammys honored Steve Jobs with a posthumous Trustee Award. I'm not sure what Jobs would have thought of SOPA, but we can imagine what he might have said had he been alive to accept the award.
Labels: Adele Alicia Keys Bon Iver Bruce Springsteen Chris Brown CNN Dave Grohl Don Lemon Foo Fighters Grammy Awards Jennifer Hudson LL Cool J Michael Jackson Scott Abraham SOPA Steve Jobs whitney houston