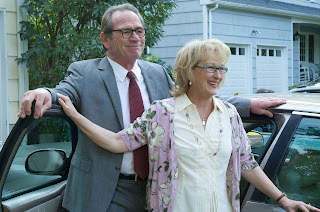 This movie is about old people having sex or at least old people trying to have sex. After 30 years and more of marriage, the sex has gone away and it's up to the two old people to get it back. It's almost a cliché idea that sex goes away in any long-term relationship, especially as people get into middle-age. For some, it comes down to mechanics and bodies not functioning as well or as healthily as they once did, but that isn't the case here. Here, the two middle-aged people are very healthy and their bodies work fine. The reason the sex is gone has come down to some kind of psychological problem, nothing too deep but such that it has put both in a rut, a habit and routine of disconnection.

Meryl Streep stars as Kay, the wife who feels the disconnection more outwardly and knows something should be done to fix things immediately. Tommy Lee Jones co-stars as Arnold, the husband who resists but deep inside knows that something needs to be done as well. Kay finds a marriage counselor named Dr. Feld, played by Steve Carell. Feld works in Maine. Kay books a ticket and a series of sessions. Arnold thinks it's a waste of money.

Filmmaker David Frankel (The Devil Wears Prada and Marley & Me), working off a script by Vanessa Taylor (Everwood and Game of Thrones), lays out those therapy sessions in an engaging fashion. It's not as engaging as HBO's In Treatment, but it's engaging. The sessions get interrupted when Kay and Arnold attempt sex exercises given to them by Feld. The comedy of these exercises is built on the awkwardness of old people trying to have sex.

Nothing new, more shocking or even funnier than the stuff on The Golden Girls sitcom is explored here. The performances are good as is expected. It's sweet and amiable.