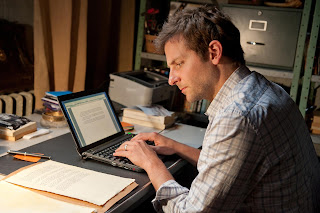 It's like the Inception of literature. It's this weird, Russian doll of a movie. The question at hand is whether or not anything we see is real or if it's all fiction invented in some writer's mind. Unlike Christopher Nolan's 2010 blockbuster, writers-directors Brian Klugman and Lee Sternthal don't put much stock in the mystery. They basically lay everything out in a manner that seems absent of any mystery until finally at the end a question-mark is added, but at that point I'm not sure that I should care about the question-mark.

Bradley Cooper stars as Rory Jansen, a struggling writer in New York City who is recently married to Dora, played by Zoe Saldana. Rory is frustrated because publishers and agents constantly reject his book. Apparently, the present-day in which Rory lives hasn't yet heard of self-publishing by way of eBooks. There might not be a lot of money in it, but he'd get his work out there, unless Rory is only after fame and fortune.

Rory finds a manuscript in an old briefcase. He decides to copy it and pass it off as his own. His publisher loves it and it becomes a best-seller. One day, an old man, played by Jeremy Irons, shows up and tells Rory that he's the author of the manuscript and that Rory stole his story.

All of this is revealed to be a story that Clayton Hammond, played by Dennis Quaid, tells Columbia grad student, Daniella, played by Olivia Wilde. Clayton and Daniella meet at Clayton's book reading. They later go to Clayton's apartment and talk about Rory's story. Clayton insists that Rory's story was just a fantasy. Yet, Daniella insists that Rory is real. It's implied that Rory and Clayton are in fact the same person.

I suppose that this is something that could be assumed early on, but it really isn't something that comes up in the text of the film until literally the last ten minutes or so. It's the only time at which the scenes involving Quaid were interesting in any way, but nothing really comes of it. The filmmakers simply end it there and leave you to guess over the truth or lies of it all, but so what?

Up until then, the film has some good individual moments. One occurs between Cooper and J.K. Simmons who plays Rory's father. Rory asks his dad for money and it's just a nice father-son moment, one that's rare in films. Cooper has a good moment with Saldana about him telling her about his theft. Ben Barnes (The Chronicles of Narnia: Prince Caspian) who plays the younger version of the old author has a great scene with Nora Arnezeder who plays his Parisian wife.

These individual moments are great individually but as part of this bigger picture don't provide us with much.