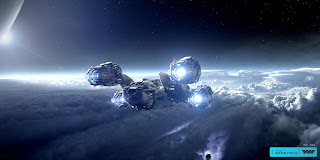 It's rare that movie-going audiences get treated to a sci-fi film of this scope, at least one that's not based on a comic book. In terms of space adventures, there have only been three, notable examples in the past decade or so. James Cameron's Avatar was the most successful. While it was beautiful and epic, its heavy-handed environmentalism left very little to be desired, but I would argue that good sci-fi films should be about something whether it's veiled environmentalism or not. Of course, they don't have to be. Sci-fi films can be pure action, such as JJ Abrams' Star Trek (2009). Those kinds of movies can be and often are very entertaining, but my preference is always when sci-fi strives for more. Neill Blomkamp's District 9 is one that does strive. I don't think that it succeeds in trying for substantive things, but I appreciate its attempts, and this is how I feel when it comes to Ridley Scott's Prometheus. I appreciate that it's trying to be about something.

Prometheus is trying to be about not just the exploration of outer space but also an exploration of creationism and the idea that some all powerful God started life on Earth. Actually, the issue at hand is that it wasn't some all powerful God that gave rise to human beings. The issue is that it was instead an alien race on some distant planet. I'm sure some author in history has written an article or even novel proclaiming that God is actually some alien being. Google the term "Directed panspermia" and I'm sure you'll be able to find a few. Just as humans can make test tube babies and can conduct all kinds of experiments with genetics, so did some alien civilization with mankind.

One of my favorite TV series addressed this very topic. The X-Files suggested in its sixth season in the episode titled "Biogenesis" that alien astronauts perhaps planted the seed for humanity out of their own genetic material. The makers of that program didn't have the budget to imagine a future scenario that would allow humans who believed in directed panspermia to hop aboard an interstellar vessel and travel to the planet where our alien forebears might live.

The problem is that The X-Files had years, episode after episode, to delve into this issue. Prometheus only has 120 minutes, which it could have done. It could have delved into this issue, but instead of being what I totally would have hoped and just be a thinking man's sci-fi film more in line with Stanley Kubrick's 2001: A Space Odyssey or with Gene Roddenberry's Star Trek: The Motion Picture (1979), it bogged itself down with nonsensical, horror elements.

Writers Jon Spaihts and Damon Lindelof borrow elements from The X-Files, but the elements that they borrow more echo Ridley Scott's Alien (1979). Those echoes reverberate from the beginning but only get increasingly louder in the last half-hour of the film, and it's that last half-hour that's the most problematic. The movie has a tone and a pacing that's pretty steady for about a hour and more. Then, all of a sudden, it kicks into high gear and becomes just completely bonkers. It starts cramming in all this plot really quickly and drags all its characters along with it. It stuffs and rushes all these concepts without giving them even a chance to breath.

Where I gave up with the movie is when Noomi Rapace's character has something incredibly traumatic happen to her and then it's virtually ignored. It's ignored not in a way that's really organic but in a way that feels manipulative either by the screenwriters or the editor. Rapace is the actress who was cast in the original The Girl with the Dragon Tattoo (2009). She plays Dr. Elizabeth Shaw, a 2094 scientist on the spaceship called Prometheus. The Prometheus lands on an alien world where a couple of the other scientists become infected with some kind of alien substance, some intentionally and some accidentally. In the span of a minute or two, Shaw has sex with one of the infected scientists, gets pregnant, tries to have an abortion but then gives birth to an alien baby. The very next second she moves on and everyone else on the ship moves on like it never happened, which is when I started shaking my head at this movie for its bull crap.

All that stuff that happens to Shaw in those few minutes would be enough to fill out a whole other movie. A woman becomes pregnant by a man who has been infected in a science experiment-gone-wrong and then has to give birth to that man's creature offspring. That's actually enough for two movies. Refer to Geena Davis in David Cronenberg's The Fly (1986) and its sequel. Throw in the creature being in part responsible for Earth's panspermia and then you have enough for three movies, but instead Ridley Scott dispenses with all of it in less than five minutes here.

Ostensibly, he rushes past what happens to Shaw to get to the spectacular ending. I do admit the ending is spectacular. If you add the opening sequence on top of it, I would not begrudge Scott's team getting an Oscar nomination for Visual Effects. It's incredible and disturbing all at once. It's so spectacular that it makes you forget what you just witnessed with Shaw, which I think is the point, but I didn't just forget it. I ultimately dismissed it because I feel like the filmmakers dismiss it, treating it as a plot-point to hit rather than a concept to mull. 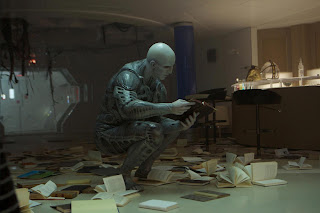 One concept that was explored in the British film Moon (2009), which seemed like it might be explored here is this idea of having to destroy that which we create. In Moon, its director Duncan Jones isn't as on-the-nose as the filmmakers here. Jones perfectly makes a metaphor to adapt to human relationship to God and creationism. Prometheus doesn't. I suppose Michael Fassbender's character of David is supposed to function as the metaphor here, but this movie basically just asks the question but doesn't offer up a hint of an answer or point of view.

When I sat down to watch this movie, I thought it might be one to mull over issues like religion and the origin of life. The first half hour sets up this expectation. Yet, it descends into nothing but a roller coaster ride, and not in a congruous way. It becomes simply gross-out moment after gross-out moment. I do love the boldness of how this movie puts its issues out there. It has a lot to dissect, but much like Shaw's alien baby, this movie gives no time for things to gestate. It just wants to get to the moment where things are bursting out of body cavities.