One of the best stories in music happened at the very end of the year. Beyoncé dropped her self-titled album Beyoncé on December 13, 2013, exclusively to iTunes. By the end of the year, it was available on Amazon and in CD form in various stores, but the R&B diva did so with no warning, no prior promotion or announcement. Of course, she didn't need to do so. The moment it happened, every website and news agency reported it and essentially did the advertising for her, and it only happened because she was already an international star.

Beyoncé is Beyoncé's fifth studio album. It has 14 tracks. It's referred to as the "visual album" because each track also has a music video or short film that comes with it. The album debuted at #1 on the Billboard 200. It's Beyoncé's fifth consecutive #1 and her highest in terms of first-week sales. Beyoncé is also the best-selling debut for a female artist in 2013.

I was able to listen to part of the album on Spotify, a music-streaming service that I just learned about this year. Yet, Spotify was launched in October 2008 in the United Kingdom and Sweden where the service is subscription based. It allows you to listen to music via the Internet, either on your computer or mobile device. It was brought to the USA in July 2011. Sean Parker, the co-founder of Napster, is a shareholder and board member. He helped to negotiate with record companies to provide their songs to Spotify.

However, Patrick Carney of The Black Keys and Thom Yorke of Radiohead criticized Spotify for not properly compensating artists. In a Huffington Post article in 2012 by Kia Makarechi, Carney said Spotify doesn't have enough subscribers to support proper compensation for artists. In a BBC News article on July 15th, 2013, it was reported that Spotify had 24 million active users, only 6 million pay monthly fees. It was also reported that Pandora, another music-streaming service, is pushing to lower how much it pays in royalties. Yorke ultimately pulled some of his music from Spotify. 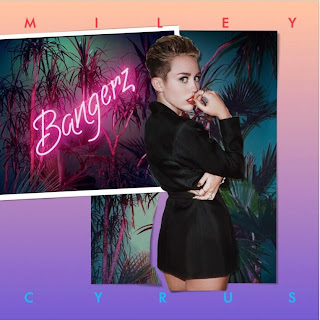 One album in its entirety I was able to stream on Spotify was Miley Cyrus' Bangerz, and I can't tell if Miley Cyrus' latest is one of the best albums or one of the worst. It teeters on the line, feeling like it could fall on either side. The problem is that I listen to Bangerz and I can't tell who Cyrus is. She clones or copies the styles and mannerisms of so many others that if this album is meant to be any indication of who she is as an artist, it's an utter failure. The 21-year-old gets completely lost. At times, she sounds like a Rihanna-wannabe. At times, she's a Taylor Swift-wannabe. At times, she's a Beyoncé-wannabe. At other times, she's a Britney Spears-wannabe. Spears contributes to the record and Cyrus seems to suck off her as well as her other contributors like a vampire, taking a bit of their essence and incorporating it into her own.

This is of course the essence of pop music and even hip hop, to feed off the styles and sounds of others. Yet, other young white pop stars that borrow from hip hop or R&B like Robin Thicke or Christina Aguilera somehow manage to carve out their own distinctiveness. Cyrus is not yet there. However, she cleverly partnered with producers that make the album catchy as Hell. So, putting aside the controversy and just evaluating the songs, Bangerz is not so dismissible. It almost is but not quite.

On the opposite end is someone like Paul McCartney who knows exactly who he is. McCartney is an artist and musician in full command of his style and voice. His distinctiveness stands, if not towers, over someone like Miley Cyrus and probably all artists out there today. His latest album, simply titled New, is one of the crowning achievements of 2013.

The one thing that McCartney and Cyrus share is that both their albums were released in October 2013, which is past the deadline for the Grammy Awards. Neither got nominations this year. Jay Z leads with nine nominations. Yet, the 44-year-old rapper from Brooklyn didn't garner any nominations in what's considered the four major categories for his latest album Magna Carta... Holy Grail. One of which he is ineligible. The other three are dominated by younger artists.

Jay Z is ineligible for Best New Artist. The other three categories are Song of the Year, Record of the Year and Album of the Year. The nominees for Album of the Year, which is the ultimate and most important award, are Red by Taylor Swift, The Heist by Macklemore & Ryan Lewis, The Blessed Unrest by Sara Bareilles, Random Access Memories by Daft Punk and Good Kid, M.A.A.D City by Kendrick Lamar.

However, there is a possibility that Jay Z could walk on stage to accept the award for Album of the Year. If Kendrick Lamar who is up for seven Grammys wins that ultimate award, according to the Grammy rules, the prize would not only go to Lamar but also to all featured artists, the producers, the mixers and the engineers. Due to some last minute changes to one of Lamar's singles, Jay Z was added as a featured artist, so technically it's another nomination for him.

Not that I have anything against Beyoncé's husband but I hope he doesn't win that one. Not that I have anything against Lamar either, but to me of all five nominees in that category, Daft Punk is by far the best. "Get Lucky," which was the lead single off Random Access Memories and is up for Record of the Year, has been stuck in my head nearly all year.

12 STORIES by Brandy Clark
AMERICAN KID by Patty Griffin
THE WORSE THINGS GET, THE HARDER I FIGHT,
THE HARDER I FIGHT, THE MORE I LOVE YOU by Neko Case
THE WOMAN I AM by Kellie Pickler
GHOST ON GHOST by Iron & Wine
THE HIGHWAY by Holly Williams
LET'S BE STILL by The Head and the Heart

ACID RAP [Mixtape] by Chance the Rapper
FLY ZONE [Mixtape] by Le1f
MATANGI by M.I.A.
AGE AGAINST THE MACHINE by Goodie Mob
FREE THE UNIVERSE by Major Lazer

"Neurotic Society (Compulsory Mix)" by Lauryn Hill
"Flatline" by Mutya Keisha Siobhan (MKS)
"Let Me Be Myself" by Nelson
"XO" by Beyoncé
"Strong" by London Grammar
"So Into You" by Chris Malinchak
"Come to My Door" by José James
"Young and Beautiful" by Lana del Rey
"To the Last" by James Blake
"I Heard" by Young Fathers
"Waiting for Thunder (Malala)" by Eric Himan
"It Makes No Difference" by Over the Rhine
"Green Garden" by Laura Mvula
"Little Black Dress" by Sara Bareilles
"Healing Hands" by Paul Allen and the Underthinkers
"Cut" by Richard Buckner
"V.S.O.P." by K. Michelle
"Give It to Me" by Sheryl Crow
"Ores & Minerals" by Mazes
"I'm Not Gay" by Jesse Pepe