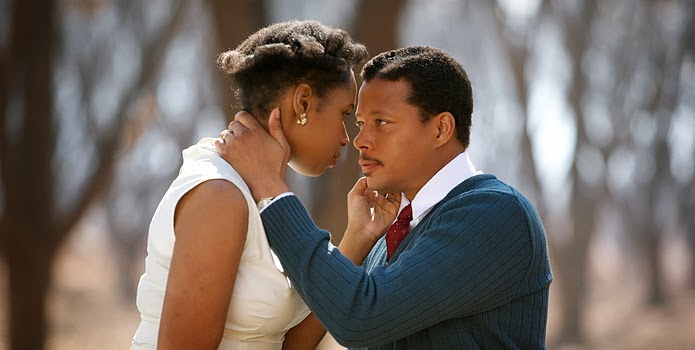 I believe CCH Pounder portrayed Winnie Mandela for a TV movie. I haven't seen that movie, but I believe CCH Pounder has the gravitas to play what has become a somewhat controversial character. Oscar-winner Jennifer Hudson (Dreamgirls) plays the titular role and does so mainly through blank stares and hardly any reactions that read as anything. Hudson does a good job in the movie's middle passage, but I wonder if her good job is more of a function of the makeup, the editing and the supporting performances around her. Based on the biography by Anne Marie du Preez Bezdrob, writer-director Darrell Roodt adapts this story with efficiency, but, by the end, I wasn't sure what to think of Winnie. Was she a hero, or was she a villain?

From the beginning, Roodt establishes Winnie as a strong girl, able to fight the boys and stand up to them, as well as not conform to traditional gender roles. She's an educated girl who can recite Shakespeare's sonnets in near-perfect English. Her father had always wanted a boy but only got six daughters, so she felt the need to be the boy her father always wanted. Why she felt this way and not any of her siblings isn't explored.

Oscar-nominee Terence Howard (Hustle & Flow and Crash) co-stars as Nelson Mandela, her husband, a lawyer in South Africa who would go on to win the Nobel Peace Prize in 1993 and then become the country's first black president in 1994. Roodt's film explores their courtship and brief marriage before Nelson was convicted and sentenced to life in prison in 1962. Howard has such a great voice and screen presence that he certainly steals the show. Just the look in his gorgeous eyes tells you so much and proves how better an actor he is compared to Hudson.

Hudson's scenes opposite Howard during the courtship are sweet and fun, but the movie launches into the politics of the fight against apartheid and focuses mainly on that. At times, the movie is thrilling and even chilling. At other times, the movie becomes an indictment of how South Africa pursued so-called terrorists or communists being analogous to McCarthyism or even to the accusations of torture used by countries like the United States on its war or political prisoners.

Never is this more apparent than in a 11-minute sequence, depicting Winnie's near two-year incarceration. Of course, Nelson Mandela is famous for surviving and supremely over-coming his 27-year prison term, but he's not the only one who was locked up. Granted, Winnie was not locked up for 27 years, but she was in solitary confinement longer than anyone else until that point. At least, Nelson got to go outside. Winnie didn't.

For nearly 500 days, Winnie was locked in a windowless room with no toilet and no bed, just an infestation of ants. She was occasionally let out for questioning and those questioning sessions could certainly be classified as torture. Roodt depicts this 500-day imprisonment brutally and Hudson's performance or her portrayal is equally so.

After the sequence, it's clearer that Roodt's film is an endurance test, meant to show what it takes for a person who believes in a cause to achieve that cause. Even after Winnie is released from jail, her endurance test doesn't end. More harassment and more danger come her way. Where the movie loses its way is the interpretation of Winnie's character following all that.

It's not clear if Winnie stays a character who has things simply happen to her and she has to go along with it, or, if she's a character who has a more active role. Prior to going to her solitary confinement, she is definitely active, essentially becoming a carbon copy of her husband at protests and rallies. After her solitary confinement though, her activeness goes into question.

For example, at one point, Nelson asks Winnie if she's had an affair. Winnie doesn't answer. She rejects the accusation and walks away. The fact that she didn't answer might be the truth of what actually happened in real-life, but it's indicative of how Winnie as a character in the latter half of this movie loses her definitiveness. Roodt does nothing to affirm or deny the affair or give any hint as to why Nelson even thinks she's cheating. Therefore, there's no basis as to judge her reaction.

The makeup is weird. Howard is aged more rapidly than Hudson. Hudson doesn't even seem to be aged at all until the last ten minutes or so, despite Hudson covering about 45 years of Winnie's life. I'd say she does well covering the first half of those years. The second half seems rushed and less distinct.

Three Stars out of Five.
Rated R for some violence and language.
Running Time: 1 hr. and 47 mins.