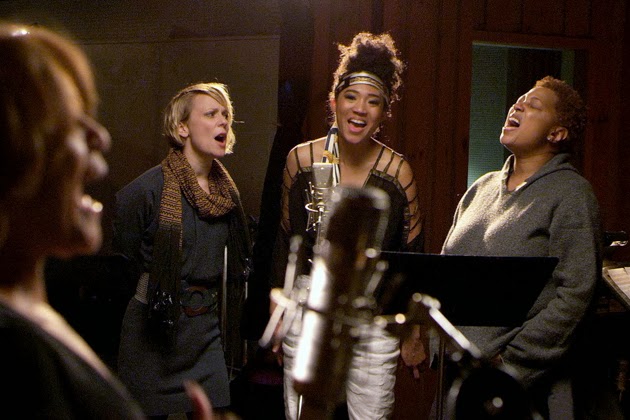 Morgan Neville's film is nominated for an Academy Award for Best Documentary Feature. It is also the populist favorite to win the Oscar. It centers on some of the best backup singers for major recording acts from the 1950s, 60s, 70s, 80s and even from the past few years. Despite its Oscar nomination, one reason it's noteworthy during Black History Month is because all the notable backup singers going back to the 50s were all black women, black women belting out and bobbing their bodies behind white men, mainly rock stars like Bruce Springsteen, Mick Jagger, David Bowie and Sting, but also for R&B acts like Stevie Wonder, Luther Vandross and Michael Jackson.

Neville interviews some of those men or gets behind-the-scenes footage to relate how vital, important and influential these backup singers were. Neville also interviews the backup singers themselves, as they recount their experiences working with these men and within the industry. We get the highs and the lows like experiences with infamous producer Phil Spector. We also learn about these women's lives, how they managed the lack of success and fame. The movie then becomes about that age-old struggle.

We come to understand that many of these backup singers like Tata Vega are just as good as comparable solo acts. Vega tried going solo but went nowhere. Now, she's on Broadway. The problem is because there are so many movies about talented people who never reach fame, this one doesn't really teach us anything new. It just rehashes a lot of the same themes that have been done tons before.

Recently, Searching for Sugar Man (2012) did on a singular basis about one artist who goes through a similar frustration. Inside Llewyn Davis (2013) does the same thing, just using a fictional construction. Neville's film does provide some nuggets of behind-the-music-business anecdotes that are interesting. The idea that these backup singers who mostly came out the gospel and church tradition were often doing sexual or controversial rock songs was a nice contradiction that one can infer but is never explored. Even the interpretation of "Sweet Home Alabama" as an anthem for the Black Power Movement was compelling.

All of those things are just nuggets. Like with other films of this nature, the real appeal comes from listening to these singers do what they love, which is sing. Neville gets the backup singers to perform live right in front of him on camera. Other times, he includes old footage or recordings of songs where instead of focusing on Bowie or Vandross, the focus is on the backup singers like Merry Clayton, Lisa Fischer or Darlene Love. They're all fantastic vocalists, so listening to them is simply a joy.

It's funny because there is a section dedicated to The Ikettes, the backup singers for Ike Turner and Tina Turner. Nothing new is learned that we didn't get from What's Love Got to Do With It (1993), but it reminded me of the TV series Welcome to Sweetie Pie's, which is about a former Ikette who now runs her own restaurant in St. Louis. That show is vastly more interesting because it's about moving on from the near-miss of stardom, rather than dwelling or lamenting the loss.

There's also a moment here where during a rehearsal, the movie cuts to a brief shot of a nameless guitarist playing music for the backup singer. We never learn his name or anything about him. While the film is all about these great singers who are never recognized, the film itself was also not recognizing important and vital players. It echoes I Will Follow (2010), which was about a black, female musician for U2 who never got her moment in the spotlight.

I don't fault the film for doing this. I'm just pointing out an irony, an irony that I wish someone on screen would have acknowledged. Yet, narrowing on the black women here is preferable and reinforcing that talent and commerce don't always go hand-in-hand is one that should be reinforced, as well as the fact that not everyone can make it in this business as a star.