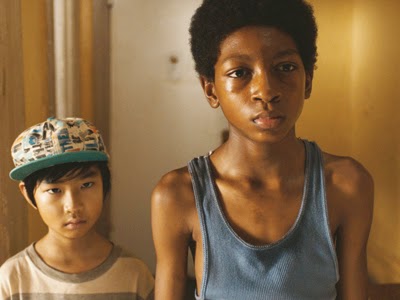 This is what Spike Lee's Red Hook Summer (2012) should have been. Of course, this movie was filmed in the same area, or at least not that far in a Brooklyn housing complex where mostly poor black people live but other minorities as well. It's a place where crime like drug dealing and prostitution run rampant, and where children face the daily threat of losing their parents and either being dumped with relatives or random neighbors who might be abusive or uncaring, or being dumped in a foster facility. There was a film that came out last year, just a couple of weeks prior called Short Term 12, which was about one such foster facility, and this movie could be a kind of prequel to that, as it shows you the conditions that lead to children ending up in foster care.

In the past couple of years, there have been a noticeable number of child actors who have been giving great performances in films. It all culminated in the Oscar nomination of Quvenzhané Wallis, the youngest nominee in Academy history for Beasts of the Southern Wild (2012). Prior to that, Abigail Breslin in Little Miss Sunshine (2006) was the youngest star that I would argue could lead a movie, but recently so many more have been added to the mix, including Tye Sheridan (The Tree of Life and Mud), Elle Fanning (I Am Sam and Super 8), Chloë Grace Moretz (Kick-Ass and Hugo) and Tequan Richmond (Ray and Blue Caprice).

This film supplies us with two more names to the great young actor list. The first is Skylan Brooks who plays the first titular character, Mister, a 13-year-old, African-American boy. The second is Ethan Dizon who plays the second titular character, Pete, a 9-year-old, Korean boy. Through a series of incidents, involving drugs, prostitution, child abuse and arrests, Mister and Pete decide to live by themselves for the summer in the apartment of Mister's mom, Gloria, played by Oscar-winner Jennifer Hudson (Dreamgirls and Winnie Nelson), with no money and no adult supervision, and with all the problems that comes along.

To me, this is a slimmer version of the Japanese film Nobody Knows (2004) and a better version of the American film Gimme the Loot, which was also released theatrically the same year but six months prior to this one. It's better because it has less sexual tension, the characters are way more likeable, and they have goals that are more interesting and meaningful. Somehow, screenwriter Michael Starrbury picks up on all those themes in the aforementioned films by Spike Lee, Behn Zeitlin, Jeff Nichols, Alexandre Moors, Hirokazu Koreeda and Adam Leon, and weaves them into a simple, survival and coming-of-age story.

Mister memorizes a speech from Trading Places (1983), starring Eddie Murphy, which is about a poor, homeless man who is plucked off the street and who all of a sudden has to pretend to be a rich man. This is apropos of Mister who is suddenly thrust into an authoritative position, a position he's never had. Thankfully, he's an aspiring actor, so he's able to act his way through it.

For the majority of the time, he has to act like an adult and in effect be one. Unfortunately, Mister feels as if certain adults are failing him, as other adults are actually failing him. Therefore, Mister feels as if he has to be the adult, even toward his own mother. He takes everything on himself and he thinks he can handle it all, but, as the film progresses, it becomes clearer to him that he can't handle it all and that he needs help.

Brooks, despite being a boy, does embody a convincing adult. Yet, he's still a boy and when it comes down to it, he can regress and become a little boy again, and that's convincing as well. For example, when Mister kisses Alice, played by Jordin Sparks (American Idol and Sparkle), even though she's probably a decade or so older than him, it's a believable adult moment that works. Another example is when Mister begs Chris, played by Anthony Mackie (The Hurt Locker and Pain & Gain), to help him find his mom, it's a believable child moment that also works.

Director George Tillman, Jr. (Soul Food and Men of Honor) has found a great talent in Skylan Brooks. As much as he's great, he is also greatly aided by Dizon who has a heartbreaking earnestness to him, an intelligence and compassion that rivals most twice his age. He's a great foil for Brooks and eventual sidekick, but one that Tillman allows to be his own person.

The DVD Special Features does include commentary from Tillman, Brooks and Dizon. The video version of the end credits song by executive producer Alicia Keys "Better You, Better Me" is present here too, along with deleted scenes, rehearsals and boot camp vignettes about training the two young actors for their roles.

Five Stars out of Five.
Rated R for language, some drug use and sexual content.
Running Time: 1 hr. and 48 mins.