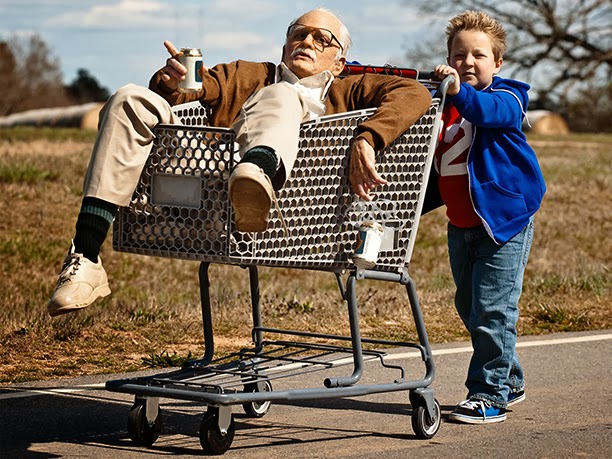 The only reason I watched this movie is because it got nominated for an Oscar. It's up for the Academy Award for Best Makeup and Hairstyling. Star Johnny Knoxville who is 42 years-old plays a man who looks like he could be a septuagenarian or an octogenarian, and arguably he was able to convince people, real people, that he was a horny, elderly man. The problem is that the real people with whom he interacts probably aren't people who were fans of the MTV series Jackass. I doubt even if he weren't in makeup, that most of the people with whom he interacts would even recognize him then. I wonder if hardcore fans had any trouble. That being said, the makeup was well done.

Knoxville plays Irving, the very randy and cranky grandfather to 8-year-old Billy who is abandoned by his mother, leaving Irving to drive cross-country from Lincoln, Nebraska, to Raleigh, North Carolina, to deliver Billy to his deadbeat father, Chuck Muskie. The movie is setup like Borat (2006) or Bruno (2009) where almost each scene is a gag perpetrated on real people. It's not like the over-the-top stunts on Jackass. It's more like MTV's Punk'd or Candid Camera, but with this through-line of Irving and Billy heading east.

Most of the gags are cheap toilet humor or cheap sex jokes. It's not really all that funny. Unlike Bruno, which satirized celebrity culture and homophobia, this film isn't really focused on anything. One scene is Irving crashing a wedding where it's literally one pratfall and that's it. There seems to be no point to any of it.

At one moment, Irving says, "You can get away with most anything, all you got to do is try." That would have been great to try to explore, but this movie doesn't nor can it. With any scene, director Jeff Tremaine can never or simply does never stick with the scene to see it through to its logical conclusion, nor give it enough setup to be effective.

As far as hidden camera shows go, ABC's What Would You Do? is more serious, but even so, it's extremely funnier than this, mainly because it follows the situations to logical conclusions. For example, the wedding scene is too short and too random. There's another scene where Irving wants to get two real guys to help him move the body of his dead wife. He gets them to do it and then says what they did was a crime. What crime? Unless she was murdered, I don't think moving a corpse is a crime by itself.

One bit has him run over a plastic penguin statue and then argue with most likely the owner who wants him to pay for it. Irving refuses and there's this back-and-forth between Irving and the angry owner. Tremaine never shows us the conclusion. He just cuts to the next scene. What was the resolution of this? What did the owner ultimately get, if anything. I suppose we are to assume that the owner got nothing, but I would have liked to have seen that.

There is another scene where Billy is dressed in drag and dances in a child beauty pagent. The punchline of Billy's wig falling off is a punchline you can see coming a mile away, so when it happens, it's not a surprise nor funny. At the end, there is a scene where Irving has to drop Billy off with his father. It's supposed to be an emotional moment, but it's like waiting for a punchline that never comes.

One Star out of Five.
Rated R for strong crude sexual content, language, some graphic nudity and brief drug use.
Running Time: 1 hr. and 32 mins.