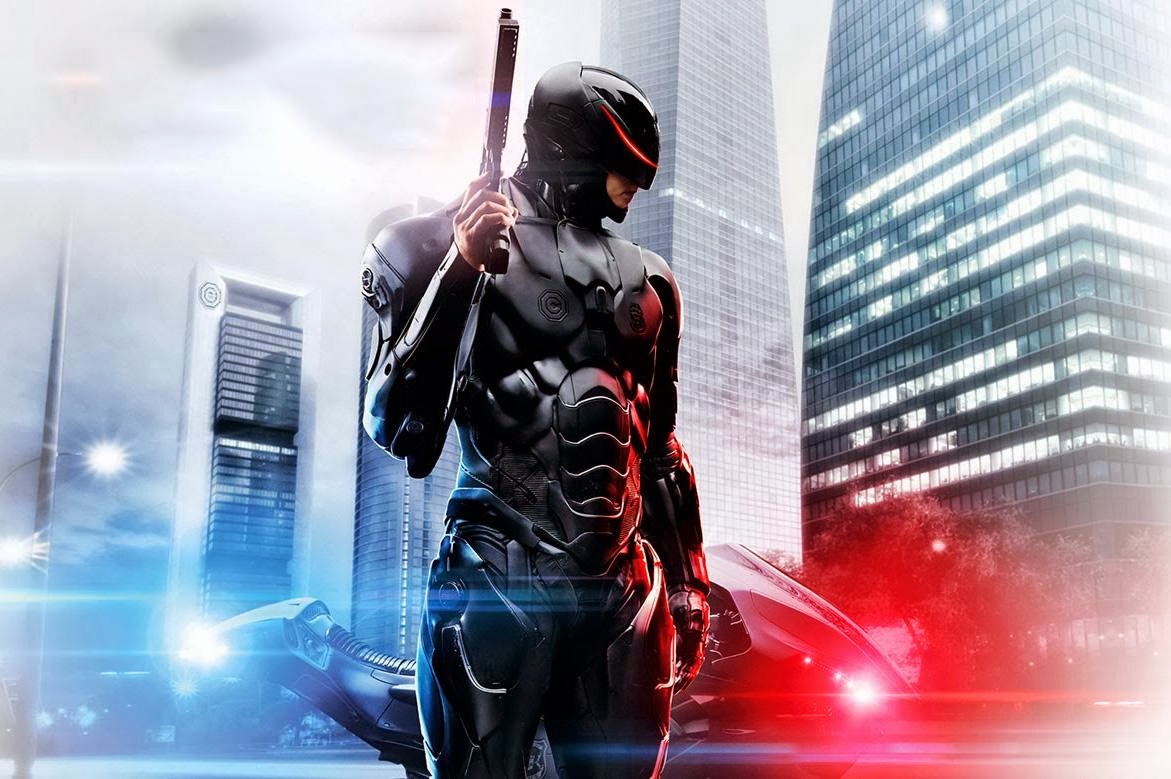 Samuel L. Jackson is doing his version of Stephen Colbert on The Colbert Report. His character is Pat Novak, the host of a slightly futuristic spin of The O'Reilly Factor. His show is "The Novak Element" and every time Novak goes on the air, it's to champion Congress voting down the Dreyfus bill, a potential law to make illegal the use of robots as replacing humans in law enforcement roles. Advanced robots like out of James Cameron's The Terminator, minus the skin, are already in use in the military in the Middle East, fighting terrorism, but now the Omnicorp CEO, Raymond Sellars wants to bring those robots to the streets of Detroit and all American cities.

I'm reviewing this movie only a week after reviewing FOX's Almost Human, and it seems to me that this film could work as a prequel to that series. In reality, it's a remake of the 1987 film by Paul Verhoeven. I saw that film, but it was so long ago, over 25 years ago, that I don't remember it, so I don't know if that film has the same debate as this one.

The debate is how much should we humans give our lives and our safety to automated machines. The question is how much should we rely on technology, which is an old debate. Given that this is a franchise film, the debate is one that's pretty settled. It's settled that it's preferable to have an emotional man with his hand on the trigger rather than a cold, logical robot. The trick of this movie is trying to have both at once.

The film underlines that cold, logical robots can kill innocent children, so we shouldn't want them. It's a great point that Hubert Dreyfus, played by the wonderful Zach Grenier, makes, but the film doesn't continue this through-line.

Michael Keaton co-stars as Raymond Sellars, the guy who wants robots as cops but sees support for Dreyfus is strong. His solution is to rip off the TV series starring Lee Majors and take a human cop who is an amputee, a paraplegic or worse and retrofit him with robotics.

Joel Kinnaman (Easy Money and The Killing) plays Alex Murphy, an ambitious Detroit detective who tries to bust a mobster and some corrupt cops but who ends up getting supremely injured in a car bomb set by the mobster. Instead of becoming a Six Million Dollar Man, Murphy becomes a $2.6 Billion-Dollar Man. Essentially, Murphy gets the Darth Vader treatment.

In my mind, after Anakin Skywalker is burned to practically nothing but a stump, which is what happens here to Murphy, and he's converted to Darth Vader, I imagine this movie could be how Vader coped with being more machine now than man. Thankfully, for Murphy, he's not twisted and evil, but, being controlled by the dark side of the force could be the equivalent here as acting robotically without emotions.

Gary Oldman also co-stars as Dennett Norton, the doctor who creates the titular Robocop and cares for him. Sellars demands Murphy be more efficient, and Norton decides to accomplish that by turning off Murphy's emotions, killing his love for his wife Clara, played by Abbie Cornish, or Nicole Kidman 2.0, and his son David.

After that, the movie becomes Dredd (2012), only zippier because Robocop can speed around on a really fast motorbike. It also becomes a first-person shooter straight out of a video game with no tension because unless Murphy is fighting Pacific Rim-style robots, it's obvious he's going to win.

Unfortunately, Kinnaman has less charisma here than Karl Urban in Dredd and you never see Urban out of the helmet. Kinnaman is seen out of the helmet and he still can't muster enough charisma or gravitas. He's as much a robot before he literally is turned into a robot. He's certainly no Robert Downey, Jr. in Iron Man 3, which is probably now the gold standard for men in metallic suits. There just isn't much depth to Kinnaman's character.

The best performance by far is Keaton as the heartless businessman. It's fun watching him in scenes with Oldman for example, and not just because of both of their connections to the Batman franchise, but because there's just interesting chemistry there. The second best performance is Jackie Earle Haley as Rick Mattox, the aggressive and tough robotics expert. His antagonistic "Tin Man" references are some of the most entertaining moments.

Samuel L. Jackson is very entertaining as well. Having him as a black man arguing for having robots as cops instead of men operates on multiple levels, including the obvious racial ones.