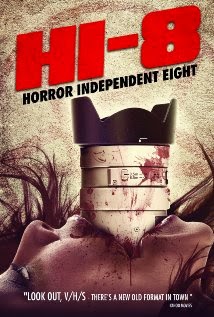 Eight, short, horror films were created for this compilation under eight rules. The first rule was that the horror film had to be between 8 and 10 minutes in length. The second was the camera had to be VHS, Hi-8, Digital 8, mini-DV with no HD, 1080P or DSLR. The third was minimal lighting or all natural. The fourth was handheld or tripod cinematography with no dollies, jib arm or steadicam use. The fifth was minimal sound equipment. The sixth was old school makeup and visual effects with no CGI or green-screen of any kind. The seventh was basic editing and post-production with no high-tech post like composites. The eighth rule was the aspect ratio had to be 4:3.

The DVD is most likely rendered in pillarbox form if you have a widescreen television. The online screener distorts the image by stretching the picture to fit the 16:9 aspect ratio that is the standard now. Unfortunately, this ruins the effect the filmmakers were attempting.

Regardless of the visual effect, the overall feeling conveyed isn't that of fear or being scary. It's instead comedy, camp and cheesy gore. The filmmakers here aren't all that frightening. They're funny or silly. If you go into it, ignoring the title, and wanting to laugh, then there is some enjoyment to be had.

Each short film could essentially be appropriately placed on the web site, Funny or Die. The only exceptions are the sixth film titled "The Request" by Todd Sheets, which is about a haunted, radio DJ named Matt West, played by Brad Westmar, as well as the eighth film titled "The Scout" by Brad Sykes, which is about a desperate, aspiring actress named Madison, played by Alexis Codding who gets lost in the desert. Both of those feature serious performances and chilling situations.

The two funniest are the fourth and the fifth. The fourth is titled "Gang Them Style" by Ron Bonk. It's a parody of zombie films set in an old folks home. Wes Reid plays Mongoose, a comical take on the main characters in The Walking Dead but is hellbent on saving his grandmother. The fifth is "Genre Bending" by Chris Seaver. It turns the tables on what can be more terrifying in a stalking and home invasion scenario.

It seems ridiculous to criticize these short films for their low production value because that was the point of the exercise. Yet, it does underscore why these shorts would probably not play well on the big screen.

Two Stars out of Five.
Not Rated but for mature audiences.
Running Time: 1 hr. and 39 mins.