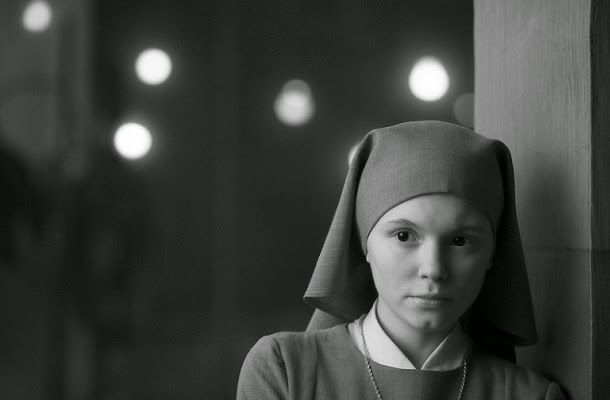 Director and co-writer Pawel Pawlikowski's film is Poland's official submission for the 87th Academy Awards for Best Foreign Language Film. It's also being recognized by various other organizations as one of the year's top movies.

It's shot entirely in the 4:3 aspect ratio and all in black-and-white using the Arri Alexa Plus digital camera. It centers on a young nun named Anna who leaves her convent to stay with her aunt Wanda Gruz in order to learn more about her deceased parents.

If the film is nominated for Best Cinematography, that would make more sense to me. The cinematography by Ryszard Lenczewski and Lukasz Zal is great. Not only is it gorgeous but it's purposeful in creating mood, tone and telling the story. Pawlikowski directs this film with not a lot of edits and instead long, continuous takes, allowing the images and everything in them to breathe and be soaked in.

Along with the cinematography, there is also a signature. Many of the shots have Anna or Wanda framed in the bottom and in the corner sometimes. Other shots have Anna or other characters in the background with other things in the foreground. It's with all likelihood that Pawlikowski is trying to say something about women with its visual language.

The look and the feel of it are quite reminiscent of Ingmar Bergman or something like Roman Polanski's The Knife in the Water. Yet, this film is about womanhood in this time and place, and the only two options that seem to be available. Agata Trzebuchowska stars as Anna aka Ida Lebenstein, a Catholic nun who's told she's actually Jewish. Agata Kulesza co-stars as Wanda Gruz, her aunt, a single and more libertine woman.

In Anna and Wanda, there are the two archetypes. Wanda, in her own words, is a slut and Anna is a saint. The problem is that Pawlikowski's film doesn't show anything in between. For women, you can only be one or the other, and this film is brief, so it doesn't explore each archetype for any extended length of time.

More problematically, Pawlikowski doesn't do much to deconstruct either archetype. They are what they are, and there's not much in between. The performances from Trzebuchowska and Kulesza sell any in-between more than the writing or directing. The dramatic moments, which perhaps should be loud and underlined, aren't. The taking of a skull or even a suicide are handled so quietly and rather silently.

Three Stars out of Five.
Rated PG-13 for thematic elements, some sexuality and smoking.
Running Time: 1 hr. and 21 mins.