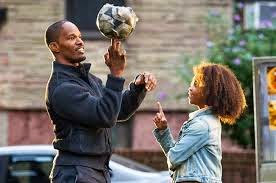 At the beginning, the movie sets up a mystery it never intends to solve and it would have been fine if the movie didn't do something somewhat hypocritical at the end.

There is a bright, bubbly, colorful sheen to this film that's very much in line with the Hollywood studio sheen of most movies in this price range. I would put it on the level of Disney's Alexander and the Terrible, Horrible, No Good, Very Bad Day and has all the value of Dwayne Johnson in The Game Plan (2007).

Directed by Will Gluck, the film has a very similar conceit. A wealthy and aloof man has a child dropped in his lap and it changes him to be more fatherly. I suppose it would be more appropriate to cite the source material, which arguably movies like The Game Plan borrow, but I never saw the source material, the comic strip and subsequent stage musical of which this is an adaptation.

A film adaptation of the musical was already done in 1982. The ABC network also did a feature for television in 1999. This film is the third iteration. The major difference. The two leads are now African-American.

Oscar-nominee Quvenzhané Wallis (Beasts of the Southern Wild) stars as the titular character, Annie, a street-smart, foster kid in Harlem who gets taken in by Will Stacks, a black Donald Trump but only a titan in the cell phone industry, played by Oscar and Grammy-winner Jamie Foxx (Ray).

Creatively, this movie fails to do anything interesting narrative-wise or visually that justifies its existence. It's not as wondrous or dazzling as Sidney Lument's The Wiz (1978), another musical adapted from another with black characters as the leads.

Nevertheless, I did think Wallis and Foxx had good chemistry. Wallis as Annie has all the insight and skills of a hustler but possesses a loveable and personable charm, warmth and compassion, which she gives in spite of what she's given. Foxx as Will Stacks is totally germophobic, dedicated and ambitious, perhaps embarrassed but mindful of his past and where he came from.

Their relationship is boiled down to one simple but effective image. Will's philosophy is that you should be able to love and trust people whom you can count on one hand, yet Will's hand is always closed as a fist. Annie simply wants him to open his hand.

This film is a musical, so there are song-and-dance numbers. None of which are great. The performances in Jersey Boys are better and all of those are just guys standing around singing. The only choreography that was mildly amusing was Bobby Cannavale as Guy, the campaign manager and self-described "cockroach" for Will Stacks. Guy sings "Easy Street" and his dancing is good because Cannavale being a man of Cuban and Italian-descent has some naturally, sexy moves.

Wallis is cute, at times appropriately sassy and she carries a bit of a tune in her performance of "Opportunity," which was newly created for this film. It wasn't taken from the original Broadway musical like most of the songs are.

Speaking of Broadway, everybody with the exception of Cameron Diaz knew that they were in a film. Diaz, however, thinks she's actually on Broadway, meaning she is constantly big and over-the-top in all her mannerisms and line-readings. As such, she's the least funny thing here. Everyone else does get funny moments.

The standout is Rose Byrne who plays Grace, a woman whose job description is never made clear. She's an executive or a consultant or something, but she's great as a socially awkward workaholic. She's lovely as well. Yet, the most hilarious scene has nothing to do with the plot.

Will Stacks takes Annie to a movie premiere for a movie called "Moon Quake Lake." It's clearly a spoof of the Twilight films. There's some commentary about product placement and a jab at other directors. It's a really great comedic and meta-moment. It was the only thing that really made me laugh. The rest of it comedically is rather mediocre.

Going back to the mystery that's setup and then the hypocrisy, that mystery is where is and what happened to Annie's parents. All she knows is that she was left in a basket at an Italian restaurant in Manhattan with a note that they'll be back. This fuels Annie with hope for a decade. Given the wealth at Will's disposal and the NSA-like power of his company, it seems pretty ridiculous that he couldn't find her actual parents.

I could except that mystery never being solved, but through the whole film we watch as this little girl is placed in the home of a man who does not want her and is in fact using her to advance his political career. Over time, he comes to care for her, but it still doesn't change the dubious and manipulative reasons that brought Annie and Will together.

Now, at the end, the movie introduces two new characters who also want to take Annie for dubious and manipulative reasons, yet they're looked at as villains. Perhaps, over time, they would have grown to love her. Who knows? But, it's hypocritical for that couple to be condemned for doing the exact same thing that the protagonist does.

Two Stars out of Five.
Rated PG for some mild language and rude humor.
Running Time: 1 hr. and 58 mins.