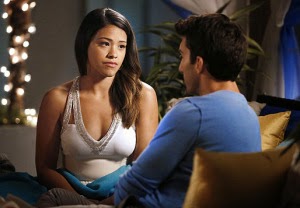 Jennie Snyder Urman developed a Venezuelan telenovela by Perla Farías where a young Hispanic girl who has never had sex because she comes from a strong Catholic tradition and wants to wait till she's married still ends up pregnant. She works at a hotel as a hostess. She goes to the hospital for a pap smear one day and she's accidentally inseminated with her boss' sperm on whom she's secretly had a crush for 5 years. She has a boyfriend and her boss has a fiancée but the pending child pull the virgin and her boss together. Along the way, a lot of crazy, soap-opera twists and turns occur.

Gina Rodriguez stars as Jane Villanueva. She lives in Miami with her very liberated and aspiring singer, single mom, Xiomara, played by Andrea Navedo, and her conservative but somewhat hip grandmother Alba Villanueva, played by Ivonne Coll. Jane is going to be a grade school teacher. She loves grilled cheese sandwiches and the telenovela "The Passions of Santos" that stars the more vain, Latin George Clooney named Rogelio De La Vega who Jane didn't know for 20 years was her biological father.

Jane has a framed flower that represents her virginity, which she plans to give away only on her wedding night. This is actually very soon because she is engaged to the sweet and somewhat, insecure, police detective Michael, played by Brett Dier. However, the hunky playboy who runs and owns the hotel that employs Jane is Rafael, played by Justin Baldoni, and Jane has harbored feelings for him ever since Rafael kissed her but never called her again.

All these feelings resurface when Jane is accidentally inseminated with Rafael's sperm. Rafael is married to the drop-dead gorgeous diva and possibly Latin femme fatale named Petra, played by Yael Grobglas. Unfortunately, Rafael had a bout of testicular cancer, which rendered him sterile, but the doctors were able to save a sample of sperm in case he wanted to have kids in the future.

Rafael's sister, Luisa Alver, played by Yara Martinez, is an OB-GYN, and she was going to inseminate Petra with Rafael's sperm. After a bender with her lesbian lover, Luisa confuses the charts and does to Jane what she should have done to Petra.

Now, there's a lot that is great about this series. The voice-over narration by Anthony Mendez is as integral, as well-written, and as well-delivered as Ron Howard's narration in Arrested Development. This show has a great pace. The performances from every single actor is so on point. My only criticisms come from narrative and thematic issues.

First on my list is the fact that at no point in the initial episodes does anybody say the word "abortion." By Episode 2, the decision is made that Jane will deliver the baby, but those first two episodes dodge saying the word, which speaks to a kind of cowardice on the part of Urman and her writers, especially in the wake of the acclaim of Jenny Slate in the film Obvious Child.

My second criticism is the plain-as-day trajectory of several of the characters. The show seems to be a story about a mother and daughter, and the focus is on them, their relationship with each other and their relationships romantically. Both of them are delightful and I like them interacting. However, the trajectory for both seems to be a very predictable and very boring hetero-normative existence, more akin to the nuclear family idea and that idea being more valuable or more preferred.

The line has always gone that biological bonds are the only ones that matter and that if a woman and man have a baby or will have a baby, then that trinity belongs together, and that's the way it should be. This is such a limited and exclusionary line of thinking that again is predictable and boring.

There's all this Dallas-style business rivalry and murder mystery that gets to be very ridiculous. It's all about putting the audience on a ride, which is fine, delaying time until the baby is born. The show is well done entertainment, probably the best on the CW. I simply wish it were braver and bolder.