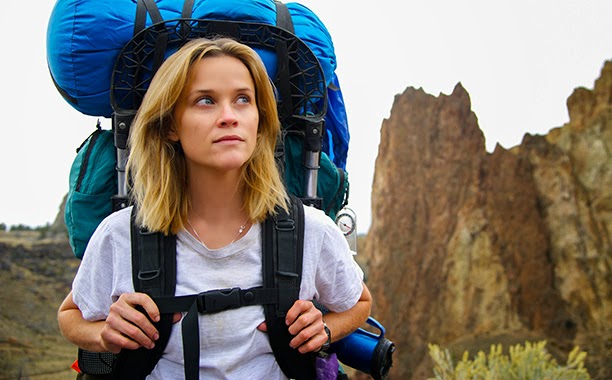 This is an adaptation of a book by Cheryl Strayed who actually hiked the Pacific Crest Trail, a 1000-mile pathway from Mexico to Canada.

It's a great accomplishment, but I'm not sure if it's enough to have a movie made about her. Yes, she goes through some very dramatic things, but the last movie about people going on a very long walk was Peter Weir's The Way Back, which was an adaptation of the book by Sławomir Rawicz who escaped a Soviet gulag and walked 4000 miles.

Cheryl Strayed's story isn't as great as that of Sławomir Rawicz. It's not as compelling. It's not as harrowing. It's not as life or death. There's potential for danger, but where one would hope for a feeling akin to Life of Pi or All is Lost, it never even approaches that territory. It's not even Sean Penn's Into the Wild.

Reese Witherspoon is fine in the role and watching her do a lot of the physical stuff, the walking and the camping, is interesting and at times funny, as this obvious city girl struggles with surviving in nature. She has her back pack and there are pit stops along the way that provide provisions or amenities. She enters towns and meets people along the way, so she's not totally cut-off.

Yet, aside from appreciating the great outdoors, I don't see too much of the point, especially of the walking. She could have just taken a road trip by car or bus and gotten the same appreciation.

I'm also not convinced about the character's down spiral. The real Cheryl Strayed no doubt experienced it in her life, but, as depicted in the movie, it didn't seem believable or at least it felt without much weight. Either, all of it felt predictable or hackneyed in a way. She does drugs and has a lot of sex. Eh, so what? What else is there?

Three Stars out of Five.
Rated R for sexual content, nudity, drug use, and language.
Running Time: 1 hr. and 55 mins.